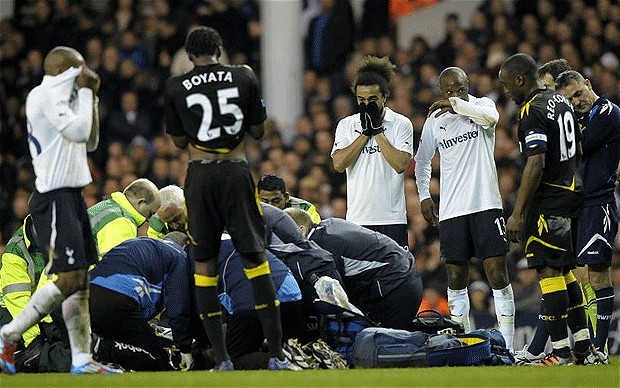 10 Things We Learnt In Lockdown With Muamba by Dan Smith

Muamba played in the League and FA Cup for Arsenal but never the Premiership. The intention was for a loan to the Championship to help develop him, but unlike Nicklas Bendtner who went with him to Birmingham, the midfielder wanted to stay and not sit on the bench.

His form at Saint Andrews saw him win promotion, win their Young Player of the Year award, and eventually would lead to Bolton paying 5 million for him. He was playing weekly in the League and some even suggested with The Gunners lack of a midfield enforcer was the one who maybe got away?

Little did the 24-year-old know that March 17th, 2012 would be his last night as a professional footballer. In an FA Cup tie at White Hart Lane, Muamba went into a cardiac arrest. It’s not what anyone wants to be best remembered for, but the incident shocked the sport, and through charity work and conferences he has helped make medical changes within the game. If the result of that saves even one life, then that’s a great legacy to have

Here are 10 things We Learnt in lockdown With Muamba ….

The DVD
In the Youth team Muamba was constantly referred to as the ‘next Patrick Vieira’. It was part of our academy’s policy to offer kids a DVD of a first player team player who was currently playing for the club in their position, in this case Patrick Vieira. Muamba would spend hours at home studying our captain and was in awe when he trained with him. Ironically, his ex-captain would help out his career after retirement.

Debut
The schedule for the Youth team was to train midweek and have weekends off, so when Muamba was told to show up for training on a Sunday morning he assumed it meant he had been called up for the first team squad for their midweek game in the League Cup. He says he froze when Arsene Wenger included him in a drill which indicated not just was he in the party of 16 but his manager planned to start him. Indeed, Muamba made his debut at Sunderland and said he failed to sleep that night due to the surreal feeling of living his dream.

The Fan
You can sense that Muamba loved the club but also perhaps accepts that he wasn’t quite at the required level. Therefore, he didn’t take any landmark for granted. It wasn’t like he was knocking on the manager’s door demanding to play, he was genuinely shocked when he was started in the League Cup. Meanwhile when he got to play at Highbury, he got 50 tickets for his friends and family . He says he’s proud to be able to tell his children their dad played at the famous stadium

Pass Forward
When you have a heart attack your perspective is different to most. Football’s not important when you feel lucky to be alive. Yet when asked if there were any regrets at Arsenal, he says he wished he listened more on Arsene Wenger’s insistence to always try and move the ball forward. The coach’s belief was that the younger a player is taught that the better he will become. Perhaps based on nerves, Muamba had the habit of taking the safe option and passing backwards. It didn’t help that Sold Campbell told him if he gets worried just pass it back ‘to me’. Cheers for that, Sol!

His Choice To Leave
Arsenal would routinely loan out their youngsters as part of their development. When Muamba returned from winning promotion with Birmingham, Mr Wenger insisted he wanted to keep him but, despite just being voted young player of the year at St Andrews, couldn’t give the midfielder guarantees of starting. Muamba states having tasted the Tuesday – Saturday schedule in the Championship it would be too hard to go back to sitting on the bench so asked to leave.

The Miracle
In an FA Cup tie at The Lane Muamba collapsed on the pitch with the game stopped. It was later revealed that for 70 minutes his heart had no oxygen. It’s a miracle that he survived, even the best-case scenario in that situation is serious brain damage. But the man is healthy, has a young family and still works within the sport.

Henry’s Advice
Thierry Henry was captain when Muamba was breaking through at Arsenal. It might surprise gooners given the age gap that the two men’s friendship grew even after the Frenchmen left. In fact, while in hospital Henry flew over from America to visit Muamba and his Dad. When Muamba equally met up with Henry while visiting the US, it was the striker who convinced him not to try and play again. At that point, the midfielder was going to ignore medical advice and attempt a comeback, but when he heard the warning from someone who had played the game it helped make up his mind.

Muamba’s Legacy
Muamba rightfully has been grateful for the staff on hand that horrid evening at the Lane and stresses if he had collapsed in most other places, he wouldn’t be alive. In his role with the PFA and as a guest speaker at many charities and medial conferences, Muamba has raised money and awareness for the need of more defibrillators to be made accessible to the public. He claims the correct use of one increases your survival rate by 50 percent. At the very least he wants more people trained in knowing CPR and how to react in that situation.

The Press
You know how some families go through ordeals, and in statements have to actually feel obliged to ask the media to show some respect at this difficult time? Well, recovering from a heart attack and coming to terms of his dream being over at 24, reporters parked themselves outside Muamba’s house and hounded his young wife. The irony being as a Premiership midfielder he never got hassled walking down the street, now he could count over 30 people camped outside his home with cameras and microphones. Just quite what they wanted him to say apart from, ‘this stress you’re causing me isn’t recommended’, who knows?

Coaching
Thankfully Muamba has been healthy enough to still be able to be on the pitch doing his coaching badges. He spent two years, at first Liverpool then Man City, working with their kids. He got the opportunity at City because his former captain Vieira was in charge of the underage groups. Such is the resources at the Etihad he was able to fast track a lot of the courses, largely with Vieira’s help. He’s been invited to come to our academy which he will after the pandemic.