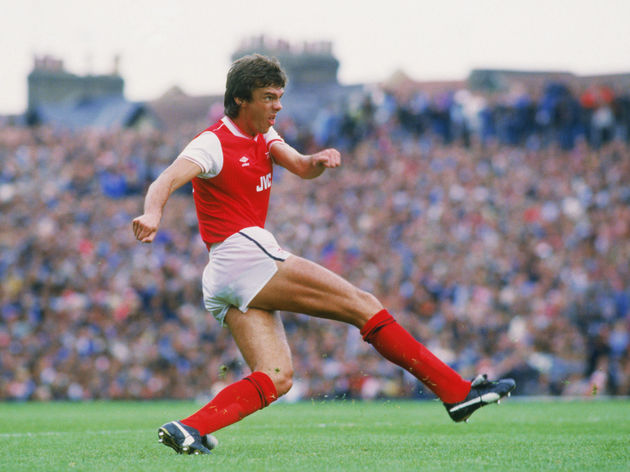 With the North London Derby this Sunday I was thinking the other day about how many leaders do we have in the Arsenal team at the moment?

We have good players, but who can you really trust to roll up their sleeves this weekend and fight for the badge? Who has enough pride In the club that they simply won’t tolerate Spurs running our face into the dirt?

So it’s ironic to me that as I’m talking about leaders, the latest guest on Arsenal ‘s Lockdown Podcast should be David O’Leary.

No one played In the red and white shirt more than the defender, a record 722 games In an unprecedented 20-year spell. When you listen to this man talk about the mentality built into you to succeed at Arsenal, you can’t help but make comparisons to today’s version.

He Was In The First Team At 17

In his first season you could understand why David O’Leary assumed he wouldn’t play often, if at all. After all, he had just turned 17 when he was told he would be starting at Burnley. His assumption was that he was filling in for injuries, but he went on to play over 40 games that campaign.

He Could Have Joined Man United

The defender confirms he had equally had a successful trial at Man United. O’Leary said though there was just something about the way he was made to feel at Arsenal which made him choose North London at his new home.

O’Leary credits the apprentice scheme as giving him the independent skills to cope with playing every week as a teenager. He says young players today could benefit from it as they are too ‘protected’ and don’t have to think for themselves. He feels a big issue is a young talent can be financially rewarded for having achieved very little in reality.

You will often hear former players refer to ‘The Arsenal Way’. The club had a reputation for always doing things with a touch of class, something that even other clubs would acknowledge.

O’Leary’s example is having just made his debut at the age of 17, his manager walks into the dressing room with the player’s dad as a surprise. The club had paid for the defenders father to travel from Ireland to witness his son’s big moment.

20 Years Was His Target

O’Leary reveals a fascinating insight into how he would motivate himself. Away from the team’s targets, he would set himself individual goals.

After 10 years at the club he realised how unique it would be if he could last two decades at Highbury. He believed the way he trained and dieted would allow him to stay at the top level for that long. He was correct…

David O’Leary was given a trophy to celebrate breaking the record for most Gunners appearances. However he wasn’t satisfied. The record stood at 622 games, but he informed his wife his personal target was reaching over 700 games to put him unprecedented territory

Last Game as A Gunner

His last game for the club was fittingly winning the FA Cup in 1993, knowing beforehand the Final would be final bow as a Gunner. Lifting a trophy was another goal he had set himself for his 20th year.

He says it was only when walking round the pitch, seeing the fans, did it sink in that it was the end of an era.

Wanted To Stay As A Coach

It’s made clear that George Graham was not the type to give a contract extension out of sentiment, nor would the player want that to be the case. What O’Leary does regret is that his manager wasn’t more open to the idea of a deal which would have allowed him to transition into a coaching role. (An offer he would make him when at Leeds)

O’Leary says if his career had started in the last two decades, he doubts he would have lasted twenty years and over 700 games for one of the biggest clubs in the country. He cites that so much goes into preparing a modern-day footballer he wouldn’t have been cleared to play as much as he did.

In today’s era clubs pay to have the world’s best sport scientists and psychologists, etc, who won’t declare a player fit unless they are 100 per cent fit.

Changes For The Better?

Having played for us from 1973 to 1993, obviously O’Leary saw a lot of changes in the sport. Asked what rules he thought changed the game for the better he said giving 3 points for a win encouraged more attacking football and removing the back-pass rules prevented negative tactics.