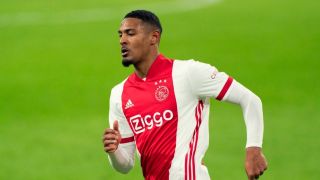 Arsenal remains in the hunt for a new striker as they prepare to lose Eddie Nketiah and Alexandre Lacazette in the next summer transfer window.

Both strikers will leave a huge void to be filled at the Emirates and several strikers have been linked with a move to the club.

According to TodoFichajes, the latest name is Sebastian Haller, who flopped at West Ham only to become a top star at Ajax.

He has already scored 13 goals in 14 matches in all competitions for the Dutchmen this season and looks set to get even more goals.

Haller has been a revelation since he moved to Ajax, but should it bother Arsenal that he couldn’t deliver at West Ham?

One argument could be that he was playing at a smaller club that cared more about their safety in the Premier League at that time rather than playing expansive football, which creates more chances for the attack.

However, what if he simply cannot deal with the defences at Premier League clubs and is thriving in the Netherlands because of the poor quality of opponents there?

But Haller has also scored 6 goals and provided 2 assists in 3 Champions League matches.

This suggests that he can deliver on the continent as well and one of Arsenal’s aims for this season is to finish inside the European places.

If Mikel Arteta is certain that Haller fits his system, then all we can do is support the manager’s judgement and hopefully, he gets it right.