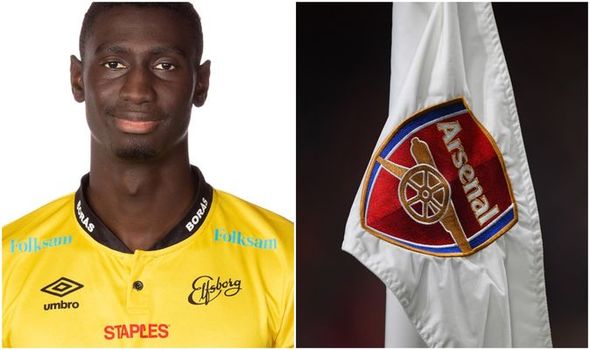 Elfsborg striker Marokhy Ndione has revealed that his dream move would be to play for Arsenal, but he isn’t ready yet.

The 20 year-old has recently earned his way into the first-team in Sweden, and is looking to push on and secure a regular first-team role for his current side.

Looking to the future however, he is keen to play for one of the bigger sides in Europe, and names Premier League giants Arsenal as his dream club.

Ndione told FotballDirekt: “Of course. But I want to succeed here first. That is my focus, but one day I want to go out in Europe.

“My dream goal is Arsenal. This is the team I would like to play for one day.

“I have followed them since I was a kid and as a young player you want to clearly represent the team you cheered on.”

When asked which players he looked up to currently, Ndione replied: “I like most players but I don’t have any idol right now.

“Players like (Pierre-Emerick) Aubameyang and Alexandre Lacazette are world-class players that I watch a lot.

“This is the level you want to reach.”

Arsenal are currently on the look-out for a new striker amidst uncertainty over the futures of both Laca and Aubz, but Ndione is unlikely to be on the shortlist to replace either given his vast lack of minutes as of yet.

It is refreshing to know that players still target Arsenal as their dream after some tough seasons endured watching our side seemingly slip down the pecking order in England, but with Mikel Arteta in charge now, there is hope that we are finally back on the front foot.

Are Arsenal still the giants they were?