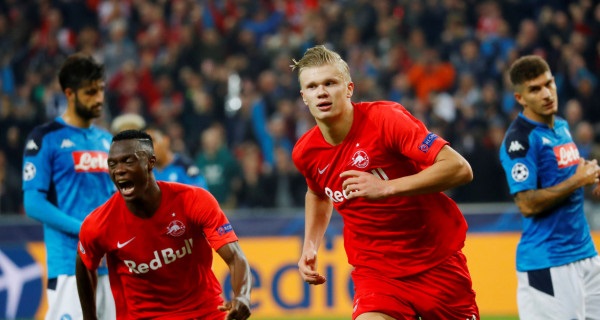 Arsenal has become the latest team to be interested in signing Erling Braut Haaland.

The 19-year-old Norwegian attacker has been shining brightly for RB Salzburg this season and his performances have been attracting the attention of some of Europe’s biggest sides.

He has been linked with a move to the likes of Manchester United and Real Madrid, but Sport Witness – citing Bild –, claims he and his father has visited Arsenal’s Colney Training Ground, as he looks to make a move to a big European side next summer.

While he doesn’t play in the most fancied league, Haaland is surely going to cost a fortune and it is unclear if Arsenal could sign him without selling one of their highest-earning attackers first.

I have seen this young lad a couple of times this season and I admit I am impressed, but I am not holding my breath that Arsenal will sign him.

I do believe that this rumour is credible, but it is the competition for his signature that I see as the biggest hurdle for Arsenal to overcome.

I mean, if you are offered clubs like Bayern Munich, Real Madrid and a whole host of other elite clubs, as was previously reported in the Guardian, would you choose to go to Arsenal?

Maybe he would, who knows, but I lack that confidence that he would choose us over the other huge clubs that do play regularly in the Champions League.