Jeremie Boga has been labelled as Europe’s best winger by Sassuolo coach Roberto de Zerbi, with Arsenal and Everton both linked with an interest.

The 23 year-old left Chelsea to sign for the Serie A side two summers ago in a reported £3.5 Million deal, and has gone onto emerge as one of the biggest talents in the division, scoring 14 goals in his 59 league outings for his new club.

His current boss has now claimed that he is tbe best player to play in his position, huge praise indeed.

“I think so,” De Zerbi told Sport Italia (via Tuttomerkatoweb) when asked if Boga was currently the continent’s best winger.

He’s not alone in heaping praise on the young Frenchman either, with team-mate Filip Djuricic claiming that he is the best dribbler also.

“Honestly, I don’t know any dribblers that are better than him,” Djuricic stated, as translated by Football Italia.

“I played with many people, but in beating his man, he’s the best I’ve ever seen.”

Last month Footmercato insisted that Arsenal were interested in Boga, but whether we would still be in the market for more additions up top following the signing of Willian remains to be seen.

We should be more interested in strengthening our midfield options this summer, before investing more in areas where we are heavily stacked, but a deal for a player with exceptional quality should never be overlooked.

SkySports states that Everton may well battle it out with German and Italian teams for his signature this summer, although how many teams will
be able to afford his £35 Million asking price this summer may well be limited.

Could Arsenal still add to their options up front or will they need to offload more players first? 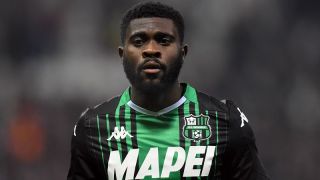