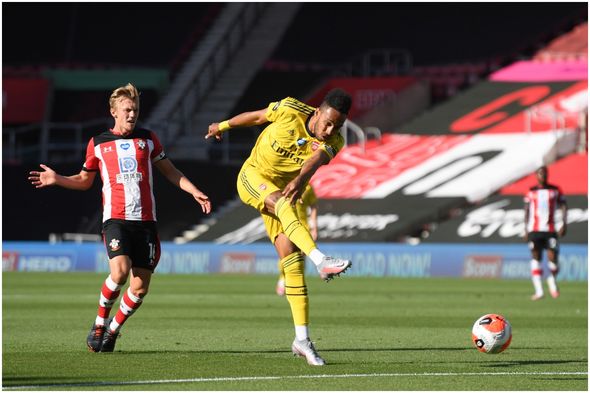 Arsenal secured the three points at the St Mary’s Stadium today, but surviving the 90 minutes without another injury was the brightest point.

Our side started the game brightly and had our opponents very much on the back-foot, and did find the back of the net inside the opening half hour, before the goal was rightly ruled out for offside.

We continued to press on with the advantage, and looked a dead cert to break the deadlock shortly after.

Pierre-Emerick Aubameyang breaking through thanks to some lackadaisical defending by Jack Stephens which allowed the striker through on goal with just the goalkeeper to beat, only for PEA to strike it against the bar.

The opener did follow shortly after that thankfully, when Alex McCarthy’s failed clearance gifted Eddie Nketiah the opener, which resulted in us going into the break with a 1-0 lead.

We started the second half unchanged, but not before long the game began to turn. The Saints were slowly looking like they were going to punish our wastefulness in attack, and with Danny Ings in the side you can be forgiven for expecting to concede.

Thankfully their pressure fizzled out into nothing, and it was actually Arsenal who sealed the game out with a second goal.

Pierre-Emerick Aubameyang looked to take advantage of some more disastrous defending by the hosts, but was taken down as he looked to take the loose ball off the struggling defender, and Stephens found himself sent off for his troubles.

The next goal wasn’t exactly aesthetically pleasing, with the resulting free kick blasted into the static wall, before a second shot was saved by the keeper only to fall into the on-running Joe Willock to place past the beaten goalkeeper with little time remaining on the clock.

Our boys secured a much-needed 2-0 win over Southampton today to fire us back up to ninth in the table, eight points behind Chelsea in the fourth and final Champions League place.

While the result was so important after our recent performances, I can’t help but think that making it through the tie unscathed was equally as important however.

Can our boys finally get back on track and secure a place in Europe for next term? Why was Ozil left out again??