Arsenal are being linked with a move for Wissam Ben Yedder this summer, three years after being abused by one of our fans.

The 30 year-old is believed to be a possible target this summer, while Real Madrid, Manchester United and Liverpool are also linked with an interest.

The French season is expected to be cancelled today, which may well cause financial issues for a number of clubs, and clubs could well be forced to sell some players in order to balance the books.

Regardless of this, Arsenal may well be able to strike a deal for the Frenchman, who has consistently found the back of the net in recent years. Reports claim he could be available for around £40 Million at present, but this may well change over the coming weeks.

In 2017, whilst with Seville, the forward took to social media to jokingly tell our side to ‘give back the trophy’ after his side beat Arsenal, only to not lift the Emirates Cup due to the points system in place. 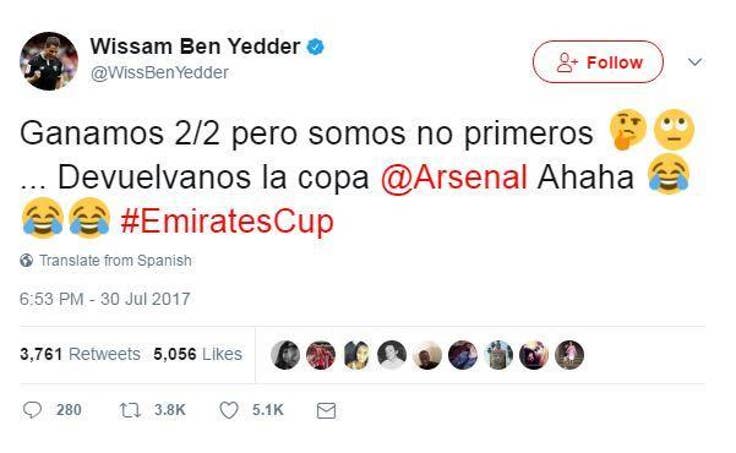 One fan clearly didn’t get the joke, and reacted angrily, with a Tweet I won’t share on this page.

The forward seemingly had the last laugh, and didn’t resort to the sad attack on him, by simply jibing at our failure to qualify for the Champions League.

I would be shocked if this one comment from one of our small-minded fans would affect any potential deal this summer, and the forward could prove to be a good replacement for Lacazette, who is currently being linked with the exit door.

Could WBY’s transfer value drop if Ligue 1 is cancelled? Will he be one of a number of players earmarked for moves to the Premier League this summer?

Jonas Eidevall believes Arsenal Women need rest periods to recover from fixture overload
Arsenal risks missing out on midfielder if he does well at the World Cup
How did all our Arsenal players get on in First Round of the World Cup?