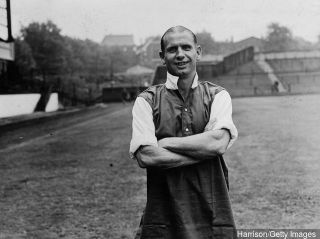 A tribute to Cliff Bastin – A True Highbury Hero

CLIFFORD SYDNEY BASTIN – ARSENAL LEGEND WHO APPEARS AROUND THE EMIRATES WITH OTHER GREATS AS PART OF OUR CLUBS GREAT HISTORY:

Club Details for league only.

It was Herbert Chapman who brought the 17-year-old to the famous Arsenal when he signed him at the end of the 1928-29 season. The rumour goes that Herbert had gone to the Exeter/Watford game, to look at a Watford player, but was so impressed by this young man, he made the decision to sign him from that one game.

Cliff made his debut on the 5th October 1929 against Everton and made 21 first team appearances in his first season.

From then, until the outbreak of the second world war, “Boy Bastin” as he was nicknamed, played over 35 games each season…the “Boy” monicker came about because of his youthful looks, but he was only 27 when the war signalled a hold on football as a profession.

Because of his accuracy and deadly finishing, Cliff became our regular penalty taker, seeing him as our third biggest goal scorer of all time. It was Arsenal’s style of play that saw both wingers bursting into the penalty area, usually supplied with passes from a certain Alex James.

However, following many injuries suffered by Alex, Cliff was moved into the inside left position and when James recovered, Cliff was then given the job of covering for another injured player, Jack Crayston, at right half – note this was on his “weaker” side, but such was his strength, he was considered good enough to cover even that position.

He regained the left-wing position during the 1937-38 title winning season and scored 17 goals. However, the following season, it was his turn to suffer a long-term injury in 1938-39 and he only played a handful of games that campaign.

It is remarkable to think that Cliff’s tally of 178 goals made him the record goal scorer for the Gunners, until 1997, when Ian Wright overtook him in 2005 and then Thierry Henry of course.

However, it was the 150 league goals that only Henry could better and that came on the 14th January 2006 – what an outstanding feat, when one considers the great strikers that our club has seen and the fact that his personal career was interrupted for six years during the second world war.

Listed below are his honours at The Arsenal:

The second world war interrupted his football legacy at the age of 27, but he was excused military service due to him failing the army hearing test. He served as an ARP Warden stationed on top of Highbury Stadium, alongside Tom Whittaker, a future Arsenal manager of course.

A really bizarre, but true, story is that the fascist Italian propaganda machine broadcast that Cliff had been captured, obviously completely unaware that he was standing on top of the Highbury stadium – such was the power of his name, when an hostile country felt it desirable to say they had captured a football icon for propaganda purposes!!!!!

It was the injury in the 1938/39 campaign that was the cause of his retirement in January 1947, only having played just seven more games, without scoring, for our club and, as it happens, the first of Tom Whittaker’s as manager of The Arsenal.

He returned to Exeter and ran a pub – he died in 1991 at the age of 79 and Exeter honoured him by naming one of their stands at St. James’s Park the Cliff Bastin Stand – The Arsenal have honoured him by including his name amongst the murals of great players around our Emirates stadium, along with a personal profile and quotes regarding his achievements.

Cliff was married to Joan and had two daughters, Patricia and Barbara. Joan survived him by over 20 years, dying in 2012 at the age of 96, so was able to see the tributes made to her husband by both clubs.

My thanks again to Wikipedia for the information on this remarkable goal scoring and versatile Arsenal legend – I would have loved to have seen him play at Highbury, but we do have some film footage of him to look back at, with great pride, wearing our famous Arsenal shirt.

Cliff Bastin was inducted into the English Football Hall of Fame in 2009, another honour his wife and children were able to witness – A True Highbury Hero.