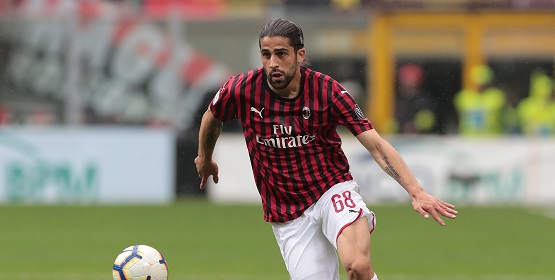 There are two persistent rumours at this moment in time involving Arsenal, one a player possibly on his way out of the Emirates and one arriving.

It is being reported today that AC Milan will offer up one of their left-backs, Ricardo Rodríguez as part of the package they are putting together to persuade the Gunners to sell them Lucas Torreira.

That would be interesting because it would then open up the question, is there really a need to sign Celtic left-back Kieran Tierney?

From a financial point of view, it would make sense for Arsenal as they would save on the money that would be required to lure Tierney to North London.

Milan’s offer is said to be a €5 Million for a two-year loan with an obligation to buy set at €30 Million.

So in effect, Arsenal would receive €5 Million up front and a left-back or they can keep Torreira and spend up to £25 Million for Tierney.

Of course, they also get €30 Million in two years time but that does not do anything for Arsenal in this transfer window.

Swiss international Rodriguez cost Milan €15 million plus €2 million in bonuses July 2017 and has been a regular for the Italian giants, he is an effective defender and could definitely do a decent job for Arsenal.

It is certainly an interesting proposition, especially considering that Torreira would welcome a move back to Italy.

It would keep intact the transfer budget and with the David Ospina sale to Napoli top that budget up by roughly £8 Million and get a defender in.

It is just the waiting two years for €30 Million that is a problem and before anyone complains that undervalues the Uruguayan, it does not because you have to include Rodriguez value as well.

One to think about certainly.