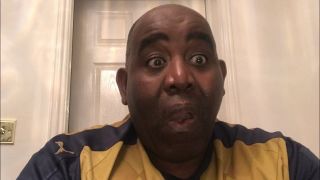 AFTV’s Robbie gets his political signals mixed up again

Not wanting to base any end of season reviews or player ratings on the emotion of missing out on Europe in the last few minutes, I decided to focus on the story emerging from AFTV. This is a classic example of the problems with politics in Sport.

Moh Haider has a following on social media due to his 7-year association with Arsenal Fan TV. He has been using his platform to spread awareness regarding the conflict in Palestine, as have certain footballers.

In recent Fan Cams he’s been displaying a Palestine flag on his clothes.

He hasn’t been on AFTV since sending out this tweet on May 10th,

You guys going to stop censoring my #FreePalestine badge yet @AFTVMedia?

Or do you want to stay complicit in the suppression of the Palestinian struggle against occupation and apartheid?

Get on the right side of the issue and stop being cowards.#FreePalestine 🇵🇸✌🏽

Robbie Lyle is so offended he is considering legal action.

It has often amazed me how a man whose model is to critique another business gets so sensitive when the same is done to his empire.

He feels he’s entitled to stand outside someone’s headquarters and swear at and mock every department, yet doesn’t like it when Gary Neville, Simon Jordan, Hector Bellerin, etc, questions his content.

Fans of the fan channel are the same. I have had readers accuse me of jealousy and an agenda against the Youtuber. I have actually watched the product for 7 years, ironically enjoying listening to Moh and later DT.

I maintain that any person who can make money doing something they love should be applauded. You would have to be bitter not to think that. At times though I felt the channel and those associated with it have become deluded, thinking they are bigger than they are.

Where their ethos used to be representing the everyday supporter, they started to sell themselves as the modern media, who the likes of Sky Sports and Talksport were now jealous of.

If you’re going to compare yourself to major media giants, then you can’t be angry when comparisons don’t suit.

In a documentary I was asked could any fan channel ever take over a newspaper as a source provider.

My answer was (and is) no, because a fan channel will be too small to be big, too big to be small.

Robbie’s handling of the conduct of one of his ‘guests’ this week again shows that.

As did his reaction to Claude’s racial remark last year.

That’s two seasons in a row he’s had to remove individuals who had been with him from the outset because of pressure from sponsors.

The problem is, to his viewers he wants to be portrayed as relatable, yet in reality his baby has grown so big that he has policies to adhere too.

On one hand he wants to treat Moh like a friend who he used to drive to games with, yet in reality he became his boss. So when Moh called out the morals of AFTV, Robbie needed to put his professional hat on.

That’s why AFTV can never be modern media.

There was no blurring out of the image.

One of Arsenal’s sponsors contacted the club unhappy with Elneny’s tweets, and yet while the club spoke with the player, they stressed ‘our players are entitled to their views on their own platforms’ and the midfielder started our next game.

The host of AFTV would have been wise to see online support for the Egyptian midfielder and backlash towards the Coffee chain.

If he has stakeholders putting pressure on him ,then that’s him allowing his football platform to become political. To stress this isn’t me being pro or anti anything. It’s about a humans right to lawfully express their point of view. Especially in 2021 when everyone has an opinion about something.

It’s Robbie’s prerogative to say to those he records, that he doesn’t want anything but football being advertised and promoted, etc.

Yet if I was Moh and I was watching one of my peers before every interview say, ‘Black Lives Matter’ and celebrates every goal by taking a knee and raising a fist, I would think that my beliefs are just as much allowed to be showcased.

The difference is Moh didn’t want to preach, he didn’t want to respond to every goal with his agenda. He was simply wearing a logo on his shirt. Both parties have confirmed he was politely asked to not wear it on screen – to which he pointed out the double standards.

Hence the blurring out of the image.

Not for the first time, Robbie’s attempt at clarifying his stance dug a bigger hole. He claimed that the gesture TY makes is part of football because the footballing community have agreed that’s their stance.

First of all the Premier League were forced to explain last summer that taking the knee is not in support of the BLM party, hence why branding was changed (essentially because the majority didn’t realise what movement they were promoting.)

Ty still says ‘Black Lives Matter’ having not got the memo.

For that reason not all clubs or players take part in the ritual.

Not all players wave the Palestine flag, but some do. So if TY can take the knee because he’s seen Aubameyang, do it, why can’t Moh wear a flag because Pogba did?

If Robbie’s criteria is that not all footballers have agreed to show the flag so therefore it shouldn’t be on a football site, then should TY take the knee when there are footballers who don’t?

I supported the FA when they fought FIFA for the right to wear a Poppy. Yet I equally saw the double standards when Pep Guardiola got fined for wearing a yellow ribbon campaigning for Catalan independence.

You don’t have to agree or be educated on a subject to respect someone’s right to their own beliefs.

You either have a zero tolerance or not. You can’t pick and choose which causes are okay to promote. Thierry Henry used to be the worst for having a message under his shirt. FIFA simply banned it. Which seems harsh but at least it eliminates the confusion.

AFTV of course are not a governing body or association. They are a private company who can have their own legislation. If they want to promote one thing but not an another, that’s their right.

As ever though, they have to accept being a genre of a YouTube channel, people will have an opinion.

Where they have to be careful is Moh wasn’t a character. He wasn’t popular due to swearing or shouting. He’s a well-spoken, intellectual thinker who many related too.

With respect to Claude. This isn’t someone who was always going to say the wrong thing in a rant. This is a well-educated man who is simply calling out AFTV for principles that could drive fans away.

The irony being whoever in power blurred out the image because they felt uncomfortable with Palestine being discussed in conjunction with AFTV.

More of their subscribers are now aware of Moh, the Flag and the issues than if they just let the guy wear what he wanted.

Be kind in the Comments…