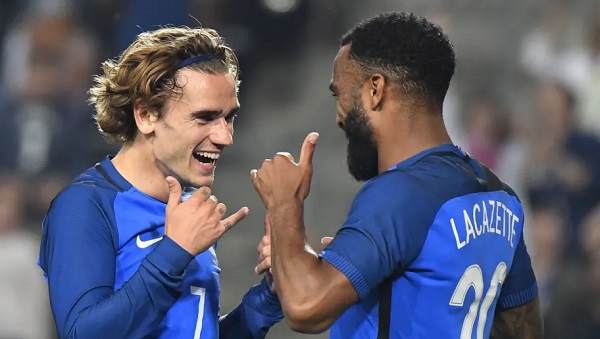 Alexandre Lacazette getting information about Atletico Madrid from international teammate

Arsenal could lose Alexandre Lacazette in the summer as the Frenchman has been getting information on Atletico Madrid from his international teammate, Antoine Griezmann reveals Spanish outlet Mundo Deportivo.

Lacazette has fallen down the pecking order at the Emirates because of the emergence of Eddie Nketiah, who seems to have what Mikel Arteta needs.

He has claimed that he is happy to remain at the Emirates, but if he continues to be behind the England teenager, he might push for a move away.

One team that has been interested in signing him has been Atletico Madrid and the Spaniards have maintained their interest in the former Lyon man.

This latest report claims that Lacazette has been asking Antoine Griezmann for information about Atletico Madrid.

Although Griezmann has left the Spanish side, he enjoyed a stellar spell with them and he remains in contact with most of his former teammates.

It is unclear what he has been telling the Arsenal striker, however, for Lacazette to be asking for information about another team, it seems that he is preparing to leave Arteta’s side.

Arteta faces a tough summer as he looks to keep his best players and to also acquire some new quality talent.

Lacazette isn’t the only player whose future is unclear, the club is also struggling to tie Pierre-Emerick Aubameyang down to a new deal.