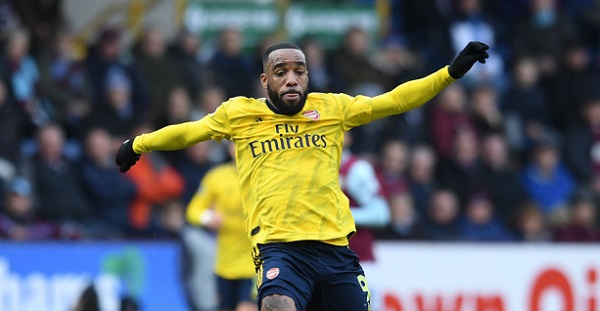 Tony Cascarino has urged Alexandre Lacazette to copy Sergio Aguero if he wants to become a success under Mikel Arteta.

The Gunners forward has struggled for goals this season and has been surpassed by Gabriel Martinelli, who has found the back of the net ten times in this campaign already.

The French forward has now gone nine games without scoring after he fired blanks against Burnley at the weekend.

He has not scored a goal since Mikel Arteta was named the new Arsenal manager and he seems to be suffering from a crisis of confidence.

Cascarino compared his present struggles to that of Sergio Aguero when Pep Guardiola was named the new Manchester City manager.

Aguero struggled to score in Guardiola’s system but the Argentinian has since adapted his game and looks set to end his career as arguably the most important player the club has ever had.

Cascarino writing for The Times, as quoted by Squawka, said: “Alexandre Lacazette needs to up his game. It was not a great game at Turf Moor yesterday and the Arsenal man’s poor display stood out. He just does not look as if he is capable of playing the way Mikel Arteta wants. He doesn’t seem to fit the system.

“Lacazette wants to play purely as a goalscorer. That is not enough. He has to up his work rate and do the closing down and running his new coach demands of him. At the moment, he looks shorn of confidence because he is not fulfilling his role in the team.

“Sergio Agüero would be a good example for him to follow. He knew he could no longer get into the Manchester City team just as a goalscorer. He had to work hard too. If Lacazette does not realise that soon, he may find he is not an Arsenal player next season.”

I know that many on this site have utter contempt for Cascarino and his opinions but on this occasion, one cannot argue with his assessment of Lacazette and what he needs to do to transform his game.