Am I dreaming? An audience with David Dein and Arsene Wenger – Arsenal legends

Am I still dreaming or did it really happen!

Postponement after postponement, I thought it would never happen but finally, it did, on Monday night at the Palladium, London.

And it gave Arsenal fans and general football fans a chance to come together with two of the most intelligent, amazing, and influential people that football and in particular Arsenal football club will ever know, to raise money and awareness for the Twinning Project!

Never in my wildest dreams did I imagine to be part of such an amazing night. And as a lifelong Arsenal fan it was an honour to be present on such a special night. So much so that I just had to write about it!

Arriving with a red carpet in front of me made me feel I didn’t belong. Somewhere I was out of my comfort zone in front of so many eyes, but once inside I never felt so at home!

The night I had the privilege to attend an event with legends Arsene Wenger, David Dein, many ex-Arsenal legends and many celebrities including Dermot O’Leary, one main Arsenal legend for me, Ian Wright and one Arsenal Women’s legend, Alex Scott.

As an attendee at the VIP party and mixing in with the likes of Freddie Ljungberg, David Seaman, Jens Lehmann, Ray Parlour, Martin Keown and many more, is something I could have only dreamed of. 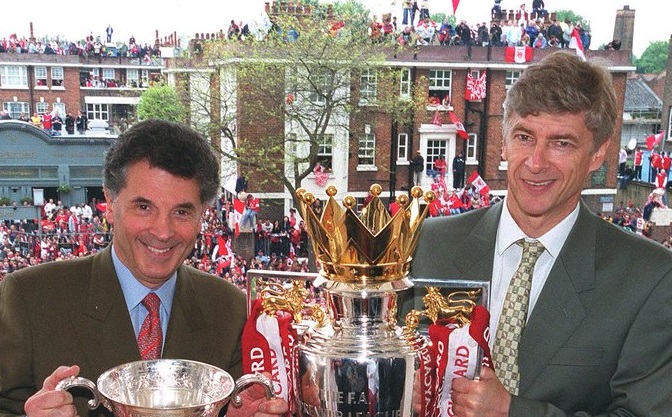 Then moving into the Theatre Hall, we were spoilt with even more legends, Pat Rice, Robert Pires, Patrick Vieira and Cesc Fabregas to name a few, well it would be just too much to name them all!

But it was a night where going into it you knew some of the ins and outs of Arsene’s tenure at the club but not in this great personal detail.

Arsene and David’s honesty made me love and respect them both even more than I already do.

The passion, intelligence and loyalty of both of these men for each other, their club, the fans and all their players and people involved at and with Arsenal and football in general -barring some referees of course- is something that to this day has not and will not be replicated.

Dein and Wenger made Arsenal football club what it is today and although people only remember the negatives about trophies and the lack of it, nobody can deny that what Arsene and David did for the first eight years of his time at the club at least, was something that may never be achieved by anyone again, namely the Invincibles!

Arsene changed Arsenal and he changed football and if they really did appoint him for the pure sense that ARSENE and ARSENAL sounded the same then it was the best appointment ever!

Yes, it all went downhill in 2007, and once David Dein left you knew it would, as the connection and job they did together was something special and could only be done together.

Unfortunately, us fans had to get used to the fact that both men left our beloved club, well the day was always going to arrive, but there is no denying the memories and the legacy they have left behind, and what a legacy it is!

One thing is for sure from the legendary players inside the hall, even to this day to see and hear them still calling Arsene “Boss” and to hear even more in depth, the way David and Arsene were father figures to many, including the amazing Ian Wright and Thierry Henry, shows that if you treat people right and impact their lives in the most positive of ways, then they will always remember and respect you forever!

Wenger is a well-loved, intelligent and respected person. An Arsenal legend in his own right and always will be. And had Dein stayed, who knows what would have happened, maybe we would have gone on to win the treble or even the quadruple, but it doesn’t take their double titles, invincibles title and other achievements away, it makes you appreciate them even more.

But the respect people and players, not just at Arsenal but in football in general, have for these two men cannot be bought by any price. The love for them will never die and neither will the respect.

They are and always will be, two legends, both individually and collectively.

No matter what happens at the club no one can take away Arsene Wenger, David Dein, their connection to the club, their friendship, their achievements and their true love and passion for Arsenal and football.

So, to two great legends of our club – Mr Arsene Wenger and Mr David Dein-  it was an honour to be there on such an amazing night, thank you for the laughs, the stories, the insights and for all you have done for football and for our club and what you will continue to do for football around the world. Keep being you, you are both amazing as you are.

This will forever be one of the best nights of my life. Thank you!

Watch this week’s <strong>Just Arsenal Show </strong>- <a href=”https://www.youtube.com/watch?v=znCl5ICDua0” rel=”noopener” target=”_blank”>Video Analysis – Dan Smith rates the Arsenal players out of 10 this season </a>