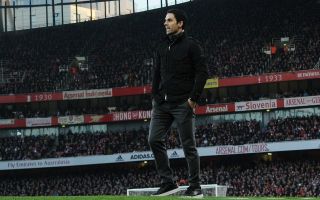 An alternative view on Mikel Arteta and his current performance – Opinion

This may seem an overreaction but an adverse reaction at least was deserved. I’m probably one of the few on JustArsenal (no change there then!) that doesn’t think Arteta is doing all that well.

For a start, he’s had three freakin’ months to sort out the defence. Yet instead of closing down the City attackers and ‘getting stuck in’ as we used to say they still maintained a nice, respectful distance (social distancing?) from them, giving them all the time in the world to make their runs and shoot. It was pathetic. Their attack down their left/our right had acres of room even in the first 10 minutes and I feared the worst.

Auba made some decent runs yet nobody found him with the ball. What’s the point of having a good, speedy striker if our players don’t give him the freakin’ ball? Why hasn’t Arteta drilled it into the rest of them to look out for runs from our strikers and wingers and release a good accurate ball to them? I wouldn’t blame Auba for moving to a team with INTELLIGENT players behind him. Sometimes our players seem to be as thick as bricks.

From left back to right-wing – Bukayo Saka must be wondering where he’ll be playing next. Auba can play on the right and Saka has shown he’s best on the left so what was Arteta thinking? Another experiment?

A midfield of Xhaka (flat out useless), Willock (also useless but might get there in years to come) and Guendouzi (still getting caught on the ball as he strolls round midfield) was asking for trouble.

Where was Martinelli? I think he’s good enough to play in ALL forward positions. If he’s not going to be a striker (lots of competition now) then he’ll make an excellent attacking midfielder, especially if Ozil is out of the picture. How Willock could be chosen instead of Martinelli makes me wonder about Arteta’s sanity.

At the very least the team should have been fit but weren’t. Hopefully they will be on Saturday having had to run around a bit more when we went down to 10 men. Poor little darlings – bet they were on oxygen in the dressing room later. Somehow, I don’t think it will get any better on Saturday as Brighton are not going to roll over and say ‘tickle my belly.’ Hope some of our better players are chosen this time.

All in all it was a pathetic display and thank goodness Leno was his usual excellent self – at last a bit of positivity there.