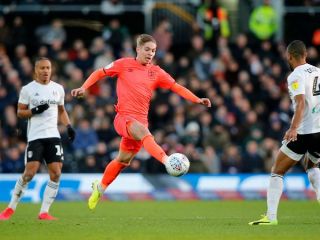 It is no news that Arsenal finished 8th in the 2019/2020 EPL table from a lack of creativity as much as erratic defending. Mesut Ozil, once the very best at creating chances in football has been sidelined, falling out of favour with his coaches and the hierarchy. Homegrown midfielders such as Alex Oxlade-Chamberlain, Aaron Ramsey and Alex Iwobi have been sold. Almost all the quality through the middle in the attacking third is gone.

Everyone at the club recognizes the problem; we need another elite midfielder.

But who? Arsenal are not exactly awash in funds at the moment and not a lot of quality attacking midfielders are available at the moment. European football’s ballooning transfer fees are not helping self-sustaining clubs like Arsenal who want to compete at an elite level. Arsenal have to be smart and very efficient in the transfer market if they are to remain competitive at the top.

Currently, we lack creative midfielders. Emile Smith-Rowe is the only clear option at the club and he cannot be relied upon week in week out. And since Mikel Arteta most likely wants to play a 4-3-3 next season, we cannot rely on Smith-Rowe as the only creative substitute next season either.

As such, we need two creative midfielders, even if we sign Ceballos. One that is good enough to slot immediately in the first team and another to rotate with Smith-Rowe.

Depending on how ambitious Arsenal are, we could go for someone like Buendia at Norwich and call it a day. But that is not enough for a club of our stature. Hence the links to Houssem Aouar of Lyon.
Sadly, Aouar could cost far more than we should pay and Arsenal might need to look at some other alternatives.

Jack Grealish could be an option. Although no Mesut Ozil, he has extensive ball carrying abilities, versatility and is English. Despite all the rumours that link him to Manchester United he won’t play a first-team role there and Arsenal are attractive enough. But he might also be too expensive, depending on Aston Villa’s valuation of him.

James Maddison is another English player that could come into the first team immediately. He’s younger than Grealish, already in the national team setup and is one of the best offensive midfielders in the league. Acquiring Maddison has the added bonus of him weakening a possible rival and as Chelsea’s negotiation for Ben Chilwell has shown, Leicester can be persuaded to sell for a reasonable sum.
Otherwise, if Arsenal plan to spend big on an attacking midfielder, James Maddison is less of a risk than Housemm Aouar who is less motivated and average in league matches.

Casting the net further, Papu Gomez at Atlanta is another option. Gomez was one of the best attacking midfielders in Europe last season but he comes with significant risks. At 30, Arsenal would have to replace him in the next couple of seasons. Atlanta play with a very specific system and their players are often unable to reach their previous heights in Gasperini system. He could also be a bit expensive.

Dominik Szbozlai at RB Salzburg is more of a risk than the others. Cheaper and younger, he is not proven outside of the Austrian Bundesliga. His performances in the Champions League have been decent but nothing too spectacular. He is a better fit as a substitute midfielder who can adjust to the Premier League while rotating with Emile Smith-Rowe. But his numbers suggest he might be a first team hit immediately. A good punt for Arsenal, if you ask me, as long as he’s not immediately first choice.

Dani Olmo at RB Leipzig is the better version of Dominik Szbozlai. A bit older and more experienced, the exciting midfielder can play on the wings and through the middle. Delightfully reminiscent of Eden Hazard with the ball at his feet, he can be the perfect blend of youth, potential, and immediate talent. But he only recently transferred to Leipzig and it is difficult to see them let him go so quickly.

Julian Brandt at Borrusia Dortmund is another attainable option. Very clean with the ball at his feet, he’s capable of playing both as an 8 or a 10. A significant player in Dortmund’s title-hunt, he’s still young enough and has a high ceiling.

If Arsenal want the closest thing to Mesut Ozil, they could do worse than Matheus Pereira at West Bromwich Albion. Once one of the most highly rated youngsters some years ago, the Brazilian has bounced around a bit, found his feet at West Brom and was one of the best Championship players from last season.

Capable of Ozil-esque defence splitting pass and also working hard, he’s expected to play a crucial role in West Brom’s EPL season and could very well be worth a lot more than what he was bought for by the end of the season. However, West Brom are unlikely to want to transfer him since they only bought him permanently this season. A player to watch in the EPL.

Unless Arsenal pull out a miracle and sign a top performer for cheap or Smith-Rowe becomes an instant revelation, they will likely need to shell out at least 50 million euros to have a good chance of obtaining a quality attacking midfielder. That’s what you get for not planning ahead well.