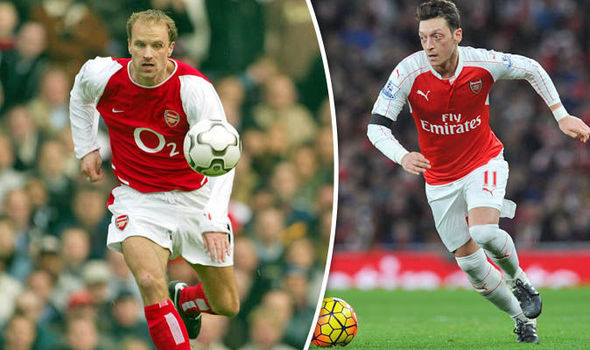 Not long ago Ken1945 did a very detailed post about comparing the two Arsenal players, both of whom have been called legends by some people.

The article was headed – Comparing Bergkamp with Ozil – An insult or fair comparison?

Here is another detailed post in reply to Ken’s findings, written by Faiz Mikael, and very interesting reading it makes too….

Definitely an INSULT really, Ken, in all manners where comparison is possible, except for vision for that final pass (mayyyybe…)

I really hope that when next season begins, MO is a Goner rather than a Gooner.

Comparing the two players as per overall facts of their Arsenal history, and not just selective facts or stats.

FLAIR AND SKILLS
DB – Aside from being a regular assist contributor, a great goal scorer with supreme skill sets as well, magic moments during his career includes “bouncing/trapping the ball trick” to go past Roberto Ayala against Argentina in the 1998 World Cup, the “juggling act” and “lob to the upper corner” goals for his hat-trick against Leicester, and the “follow me the ball” trick he did against Newcastle. Made players around him, be it Ian Wright, Anelka or TH14 look better. People may say that he played with better players during his time, but as much as Ian Wright and Anelka were big names for Arsenal, they were never really a big name or regular internationals for England and France. He was perceived as a flair player but never a lazy or luxury player that must be carried by the team. AW has been quoted to have said that he was the most skilful player he has ever worked with.

MO – I think Santi and Sanchez made him look better than he ever really was at Arsenal. And as for magic moments, I can recall just one from Ozil when we won 6-0 or something against Ludo (something) in a UCL Match. Save for that one single moment, I had never been in awe of him whenever I watch him turn out for Arsenal, not even during the 2015-16 seasons. RVP, the one season Captain, at least got me thinking “Wow, this is one hell of a player, he carried the team and we would not get top 4 without him”. Throughout his career at Arsenal, MO was, and still is, consistently perceived as a flair and luxury player that must be integrated into the team no matter what, in order for Arsenal to win a match or two, or even ludicrously, the big one.

ATTITUDE
DB was not happy that despite training hard, AW did not play him as much as he used to, and therefore choose to retire at the end of the 2006 season rather than just taking it easy in the next season and continue to collect his wages mostly as a sub. A supreme professional on and off the field though out his Arsenal career.

MO, on the other hand, refused to have his wages cut during the Covid 19 stoppage period, and seems to be quite happy these past 2 years collecting his obscene wages (I can live comfortably doing nothing for my whole lifetime with just 1 week of his wages) doing nothing most of the time. Time and again the formal excuse are another “back pain episodes”. Many here I know, blame the Board for his second contract. I am no fan of the Board post 2006, and I blame them as well, but more so on the wage earner. To demand that much money from the club, and then not try hard enough to deliver either in training to earn the manager’s trust or in games to earn the money, is borderline criminal behaviour. I have no idea why some people are still saying now ‘it’s not his fault’ because 3 professional managers have come in and chosen not to give him that trust, based on how they seen him perform in training and matches.

IMPACT TO ARSENAL AND THE CLUB
DB – From the arrival of DB until his departure, you can only say he elevated his team mates, and the club seemed to grow only bigger. absolute positive all around.

MO – You can argue that the rot towards Arsenal not being a big club anymore began when he arrived at Arsenal in 2013. Aside from a big 2015-2016 season, he has been bang average for a 150k+player during his first contract tenure. But when one were to consider he was on 350k since 2017-18 season, he must go down as one of the biggest flops in Arsenal history because TBH except for amusing us with constant anecdotes of his “chronic back pain episodes”, he has not delivered even a 10k per week return on the training and actual pitch, as well as off it. In fact, to me, he looks more like just a constant source of distractions and irritations to the team rather than someone who had actually help to lift the team up.
There may be a good player somewhere inside this little boy but based on the evidence of what he had actually delivered to Arsenal in terms of performance, we should not even begin to think to put him on the same pedestal as the great DB. In fact, after his contract renewal in the second half of the 2017-18 season, to me he looks more suited to be compared to signings such as like Andre Santos. Someone like Fabregas (the flair player…not the little boy person) IMHO comes a bit closer to DB than MO ever did in terms of flair and performance in an Arsenal shirt, but even for him, it was not that close to DB.

To sum up, I heard about DB at Ajax and Holland, and then Italy, and saw him out in our Arsenal shirt week-in week-out and come to respect and have only the highest regard for him as a Gooner.

With MO, I heard about his exploits in Germany and Spain, saw him in bits and pieces at Germany and Real Madrid, but when it comes to seeing him in an Arsenal shirt week-in week-out, I came away hugely disappointed from day ONE. I keep hoping that there is more in his locker to merit his big player reputation,s but to this day sadly he has never come close to the level I was expecting to see. In fact, I would go so far as to say the downfall of AW began the day he signed MO, and concluded when he lost Santi, our magician and the real heart and soul of the team, through long term injury.

I think MO is just a player who frustrated a lot of people because he takes too much from Arsenal, he delivers too little. Everyone can see he has clever movement, vision and final pass, it’s just that he has not applied them on a consistent basis or often enough for Arsenal.

I know that even our esteemed AW himself had compared MO to DB, but that was during the early days of his arrival, where any managers are bound to talk up their new signings. I doubt that even AW himself would be bothered to say the same now about MO after the career he has had with us. To be fair he had not done too bad during AW time, he was just never that good enough for me to warrant comparison or any mention in the same sentence as DB.

Anyway, all I know is that Arsenal really needs to move on from this tiresome MO chapter. The quicker it is done, the better for the club.