Arsenal fans are relishing the chance to spoil Chelsea’s relentless march to a domestic double, and the chance to claim a record 13th FA Cup win this weekend. So can The Gunners overcome Chelsea to lift the trophy?

A look at recent Premier League and FA Cup form, as well as a dive into the head-to-head fixture history between the two clubs gives us some indication as to what part of London the trophy will be heading to on Saturday night.

Arsenal’s disappointment at losing out on a Champions League qualification spot masked a decent run of wins at the end of the season – mirroring Chelsea’s results across the last five games.

Chelsea’s straightforward run-in and title win began after a 2-0 loss to Manchester United at the end of April.

Six wins on the bounce followed, culminating in a 5-1 romp against Sunderland on the final day of the season.
Arsenal’s late season flourish also followed a defeat in April, at the hands of North London rivals.

Over the past 20 games Chelsea have shown title-winning consistency, grabbing nine more points that the Gunners.

Arsenal have enjoyed a relatively straightforward Cup run, with only Man City presenting any real resistance in the Semi-final at Wembley on April 23rd.

Chelsea have had to overcome strong resistance from Man United and Tottenham, in the Quarter and Semi-finals respectively, to reach Wembley. 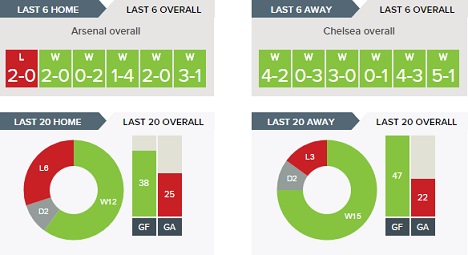 HEAD-TO-HEAD ULTIMATE FORM GUIDE
Chelsea’s consistency throughout the season ultimately delivered them the Premier League title, but as mentioned Arsenal have demonstrated strong form of late.

The Blues were more prolific in front of goal across the final ten league games, scoring 11 more goals than The Gunners at a rate of nearly three goals a game.

But Arsenal have found their stride from a defensive viewpoint, conceding fewer goals and keeping more clean sheets than Chelsea across the run of games.

As a result Chelsea can point to far stronger offensive form averages heading into the game, while Arsenal boast marginally stronger defensive form.

A move to a back-three seems to have benefited Arsene Wenger’s side, and could be key nullifying the threat posed by Chelsea’s very similar formation.

The Blues are most likely side to score first (54% probability) and it is likely the two teams will score three or more goals between them (56% probability). 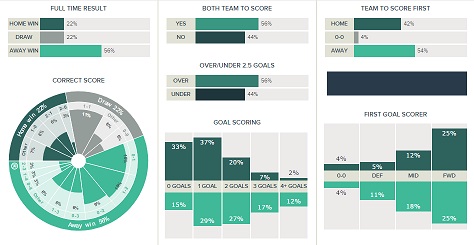