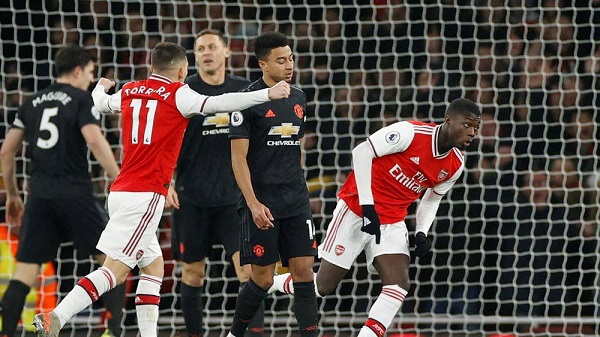 Arsenal 2-0 Man Utd, a terrific performance from a revitalised Arsenal

It was a long time coming and one could not have wished for a better start to the new year.

Right from the kick-off Arsenal was in charge, they were organised, disciplined and controlled in possession. The attitude and aggression was spot on and the win was, without doubt, fully deserved.

It took just eight minutes before Arsenal went in front through Nicolas Pepe and it remains a little baffling why he has not started more often recently.

Arsenal did not sit back and continued to dominate the game and when the second goal came, via the unlikely source of Sokratis, it was an accurate reflection of what was happening on the pitch.

The lads fully deserved to be leading at half time and if anything, should have been further ahead.

The second half was always going to be a different affair, United was expected to up their game and to some extent they did.

United had more possession and gradually upped the tempo, however, Arsenal dug in and for the first time in a long time, I was not overly concerned. I actually had confidence the lads would stay strong and manage the game in a far more efficient manner.

The defence has to be commended, they are much-maligned but today they were very professional, their discipline never dropped and that tells me that they are listening to Arteta.

The midfielders were immense, they helped out the defence like warriors and they were far more creative than what we have become accustomed to.

Were there some negatives? Yeah, sure but I cannot really recall them simply because every team makes the odd little inconsequential boo boo and that is all they really were today, you do not remember that stuff.

Make no mistake, this was a huge improvement, Arsenal made United look poor and this is the third game in a row that they have improved from the previous game.

It is only one game and there are still some tough times ahead but there is now light were there was just darkness before. Tonight we saw what Arsenal really can be under the right guidance.

Maybe, just maybe, they now have that guidance.