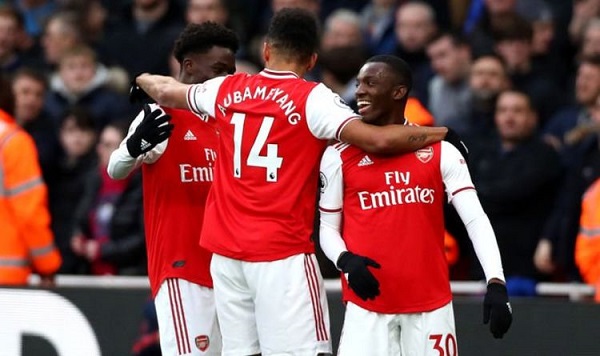 Arsenal and Everton played out a classic with the Gunners emerging with all three points.

The game started off at a frantic pace, we were not even one minute into the game when the first goal went in from Dominic Calvert-Lewin.

It was a well-taken goal though Everton was helped through some flapping defence from David Luiz who was all over the place.

Arsenal lost Sead Kolasinac to what looked like a nasty injury and Bukayo Saka was introduced into the game on the 18th minute and it did not take the teenager long to make an impact.

Arsenal equalised on the 27th minute thanks to a beautifully taken goal from Eddie Nketiah.

Mikel Arteta was once again vindicated selecting Nketiah who connected on to a fantastic whipped in cross from 18-year-old Saka.

Arsenal then took the lead, this time through Luiz feeding a wonderful through ball to Pierre-Emerick Aubameyang who ran into the area and he simply does not miss when in that position.

That was 2-1 but the goals did not stop there. Everton equalised almost five minutes into first-half injury time through Richarlison and yet again, it was bad defending from Arsenal.

Phew, four games in a frantic first half and some questions will be need to be asked about some of the defending we witnessed in that first 45 mins.

The second half started almost as a carbon copy of the first but this time it was Arsenal that scored straight after kick-off.

The Everton defence was hardly effective there and It was Nicolas Pepe this time assisting Pierre-Emerick Aubameyang and bang, Arsenal is 3-2 up.

Chances kept on coming at both ends of the pitch and it really looked like it was going to be just a matter of time before another goal went in.

Andre Gomes came on for Everton on the 60th minute and it was good to see him back in action following the horrific injury he suffered earlier on in the season.

Bernd Leno was doing his usual shot-stopping and even Aubameyang was helping out in defence as Carlo Ancelotti’s men started to press for the equaliser.

Calvert Lewin came close to the equaliser in the 78th minute and Arsenal was starting to look a little jittery, however, it was certainly not all one-way traffic and Arsenal looked dangerous on the counter-attack.

It has to be said that Arsenal was defending well as the game neared a conclusion, they may have been ragged at times but they were playing as a well-organised unit when under pressure.

With just a few minutes to go Leno made a brilliant clearance a good ten yards outside of his area, if he got that wrong who knows what will have happened, a goal, red card? But it was well-judged and again, the German came to the rescue.

The game ended 3-2 and on balance I would say Arsenal deserved it. There were some good performances, Nketiah, Aubameyang, Mustafi and of course, Saka but there were others as well.

That is an invaluable three points and top four or five is now within reach.