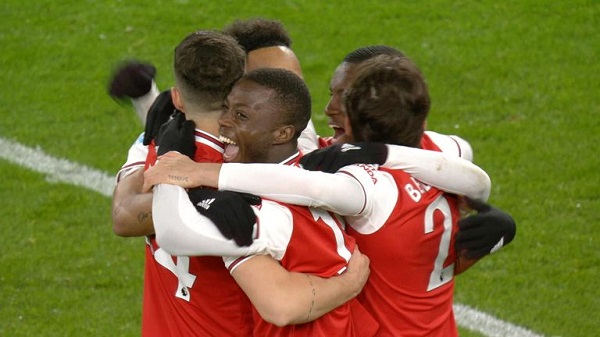 Newcastle United definitely started off the more brightly helped by some characteristic mistakes from the usual suspects, however, they were unable to take advantage.

Arsenal started to get more into the game as the half went on marshalled by the impressive Mesut Ozil and ably assisted by Dani Ceballos.

Nicolas Pepe looked dangerous down the right flank but too often lacked that final killer ball, Bukayo Saka looked a shell of what we have seen in recent games and Pierre-Emerick Aubameyang had brief moments but was not brought into the game nearly enough.

Granit Xhaka picked up his usual yellow card, Shkodran Mustafi made his customary error and at the same time nearly scored at the other end.

Bernd Leno made a couple of decent stops but was not really tested, Bellerin had his hands full with Allan Saint-Maximin.

There was a lack of invention from Arsenal and to some extent that is because of a lack of confidence, which is surprising really when you consider they have not lost this year.

Steve Bruce’s men looked very dangerous on the break and certainly have the pace to cause Arsenal some serious issues.

What summed up this half for me was a clear lack of quality in the final third from both teams.

The bottom line is that Arsenal made Newcastle United look good, overall, it was not just good enough from the home side and much more is expected from them in the second half.

Arsenal started the second half the better and within five minutes Eddie Nketiah came close with his shot clipping the top of the bar.

Dani Ceballos was becoming a thorn in the side of Newcastle and was instrumental in the bright start to the second period enjoyed by the Gunners.

Aubameyang made the breakthrough on the 54th minute with a brilliant header to the keepers left. The cross was supplied by Nicolas Pepe and the record Arsenal signing was not finished.

Young Saka did fantastic out on left to leave two Newcastle defenders floundering and his pinpoint pass to Pepe was duly converted to put Arsenal two up.

Confidence was now sky high and at this stage, more goals were fully expected.

Newcastle did come close to getting themselves back into the game but Ciaran Clark missed an absolute sitter, that was embarrassing.

Aubameyang came close with a delightful chip that skipped off the crossbar and Arsenal were very much in control of the game.

Newcastle then came close again with a shot off the post from the highly impressive Saint-Maximin.

Arsenal’s third goal came courtesy of Mesut Ozil capping off a fine game from the German. That goal will come as a great relief to the 31-year-old who was then immediately substituted to a standing ovation from the home crowd.

But Arsenal was not finished, Lacazette found himself on the scoresheet and the way the players celebrated showed how much it meant to the whole team. The look on Laca’s face said it all.

That final goal capped off a very good afternoon for the team and if the lads can continue like this then who knows where they will end the season.