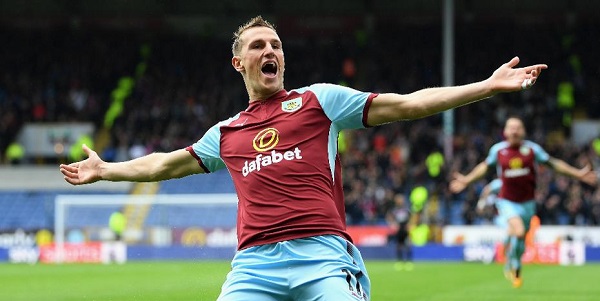 Arsenal has been advised to sign Burnley striker Chris Wood if they want to replace either Pierre-Emerick Aubameyang or Alexandre Lacazette.

The Gunners are currently negotiating with Aubameyang over a new deal as his current contract expires in 2021. He has been the club’s best player so far but he seems to be looking to move to a bigger club.

Lacazette has a deal with the Gunners until 2022, but the Frenchman has been underwhelming for Mikel Arteta so far.

The former Lyon man has scored just seven league goals this campaign and report claims that Arsenal may cash in on him as they look to rebuild other areas of their team.

The Gunners would most likely be turning to the European market to sign replacements for both attackers, but Arsenal fan and writer, Matt Scott believes that they don’t have to look that far to get a good replacement.

He reckons that the Gunners would do just fine if they replace either with Burnley’s Chris Wood.

He told Hawksbee and Jacobs on Talksport: “If Arsenal do lose Aubameyang or Lacazette, then Eddie Nketiah and Gabriel Martinelli, great as they look, are still too raw at the age they are to be leading the line for a club like Arsenal.

“So they are going to have to look at another centre forward and, believe it or not, I believe it should be Chris Wood!

“People are not going to like it, but I’ll tell you why I think so.

“It’s my view that Arsenal are missing Olivier Giroud. He always gave them another way of playing.

“In his prime he was very, very good for Arsenal and since he’s come back into the Chelsea team this season he’s been terrific.

“Giroud’s minutes-per-goal ratio in his last few seasons at Arsenal was unbelievably good, he’s a real finisher and I think you’ve got one in Chris Wood at Burnley as well.

“The first thing you have to say about Arsenal generally is they are absolutely the worst team in the air in the whole Premier League. It’s astonishing how bad they are.

“Shkodran Mustafi apart, they are all absolute flowers when the ball is fizzed in.

“It’s fair to say Nketiah has showed a bit of early promise in heading the ball, but he’s only 5ft 9in so you can’t really expect him to be the target man I think Arsenal need to add that other option.

“Wood is an absolute identikit to Giroud, in football terms. He’s not necessarily the quickest, but I think he’s quicker than Giroud.

“And that, of course, is also him playing for Burnley and not with the creative players there are in the Arsenal team.

“I think you can’t scoff at what a good goalscorer Chris Wood is.”