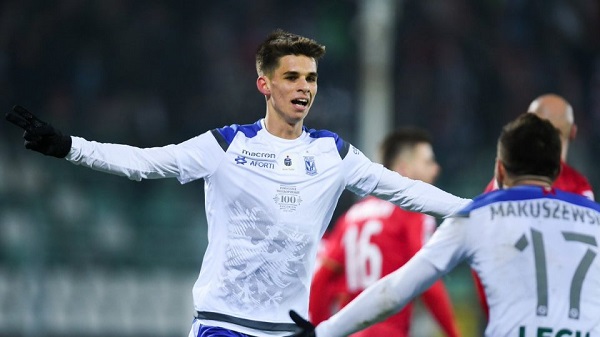 Arsenal among the clubs interested in signing young Polish midfielder

Arsenal is one of the teams interested in signing Lech Poznan youngster, Filip Marchwinski, according to a report from Italian publication CalcioMercato.

The 18-year-old has been attracting the attention of Europe’s big sides after breaking into the Poznan first team at such a tender age.

Marchwinski has played 24 times and scored five goals for his team this season and those numbers have raised the eyebrows of some of the top sides.

The CalcioMercato report also claims that Inter Milan is winning the race for his signature, but Arsenal and Inter are not the only teams interested in signing him.

The same report further claims that Juventus, Hoffenheim and Atalanta are also in the race for his signature.

After seeing the likes of Joe Willock, Bukayo Saka and Gabriel Martinelli take their chances this season, Arsenal won’t be afraid of giving chances to new teenagers.

Mikel Arteta expects to keep William Saliba as part of his team next season when the Frenchman returns from his loan spell and the Spaniard will hope he can convince Marchwinski that he has a better chance of breaking into the first team at Arsenal than at other clubs.

The Gunners are preparing for a major overhaul in the summer with some of their top stars expected to leave, Arteta will be targeting players who are likely to stay at the Emirates for years to come.