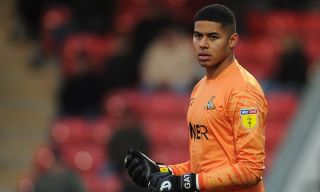 Arsenal has been named by Sun Sports as one of the teams tracking impressive QPR goalkeeper, Seny Dieng.

The 26-year-old has been one of the London side’s best players this season and clubs in England’s top-flight want to sign him.

The report says that the Gunners are competing with Leeds United and Crystal Palace for his signature.

Arsenal signed a backup goalkeeper to Bernd Leno in the summer when they moved for Runar Alex Runarsson.

They had sold Emiliano Martinez to Aston Villa in the same transfer window after the Argentinean’s impressive showing for them during Project Restart.

While Martinez shines at Villa as one of the best goalkeepers in the Premier League, Runarsson has played in just cup games for the Gunners and he has been far from convincing.

The Iceland international is the only serious competition that Bernd Leno has at the moment and he doesn’t look like a goalkeeper that would push the German for a first-team place.

Dieng, on the other hand, has been the first choice at QPR this season and he has already played in 20 Championship games for them.

They aren’t having the best of seasons, but his performances have been something for their fans to be happy about.