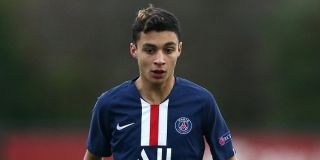 Arsenal and Chelsea linked with a move for teenage prodigy

Arsenal ready to battle it out with Chelsea for young PSG midfielder.

Arsenal has become the latest team to be linked with a move for PSG’s Kays Ruiz-Atil as the youngster continues his development in the French capital.

Atil joined PSG from Barcelona in 2015, but he has not broken into their first team yet and a move away seems to be on the cards.

The 17 years old is wanted by a host of other top European sides, but Foot Mercato claims that Chelsea is Arsenal’s main challenger for the teenager’s signature at the moment.

Atil reportedly has a deal at the Parc des Prince until 2021, but he hasn’t signed an extension with the French champions yet.

Arsenal has a reputation for signing and developing talent from France. They are not afraid to play their youngsters and they will no doubt be keen to show Atil how many opportunities he can get should he join them.

Chelsea has also had to rely on youngsters this season after they were banned from signing any player until the last transfer window. Lampard is, however, shifting his transfer policy towards signing older and more experienced players as his youngsters are starting to struggle.

Atil could be a good signing for Arsenal, it would not be easy for him to break into the Arsenal team immediately but he will be given chances and if he does impress then he is certainly at the right club to be trusted with a place in the senior team.

Considering how Chelsea have previously used their youngsters it is unlikely he will be given such chances with them.