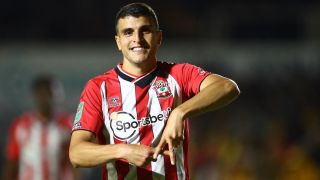 Mohamed Elyounoussi has been a bright spark for Southampton so far this season and has caught the attention of both Arsenal and Leicester City.

The 27 year-old spent the last season on loan with Celtic in the Scottish Premiership, scoring 17 goals and being credited with eight assists, but has returned to the south-coast this term and has been taking his chance with both hands.

The winger will have just 18 months remaining on his contract come January, and you would imagine that a decision will need to be considered in the near future whether the Saints will be looking to extend his current deal, or whether to look to cash-in on his departure, and with The Sunday Mirror today printing(on page 74) about interest from both Leicester and Arsenal, they could well opt for the former.

Southampton signed the forward from Basel for a reported £16.2 Million in 2018(according to Transfermarkt), but has only just started to show the sort of form that they had hoped to expect from him.

One of the biggest pluses about a potential move to Arsenal could be that he already has a relationship with Martin Odegaard having played alongside each other for the Norway national side, but it remains to be seen whether the club will seriously consider bringing in another winger, with the likes of Folarin Balogun, Eddie Nketiah, Gabriel Martinelli and Nicolas Pepe already struggling for as many minutes as they would have hoped.