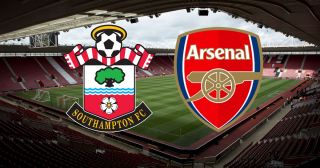 Arsenal and Southampton are both clean sheet specialists – 0-0 draw tonight?

We are set for a very intriguing clash tonight at St Marys as Arsenal visit Southampton for the second time in three days.

The FA cup game ended up as a 1-0 win to the Saints, but it was only decided by an own goal from Gabriel to break the deadlock.

That result meant that Ralph Hasenhuttl’s side have now kept 5 clean sheets in their last 6 games (in all competitions), and also their 4th in a row at home. The Gunners have also got 5 clean sheets out of their last 6 as well, but considering just EPL games, another clean sheet at Southampton would see them go five games without conceding for the first time since 2006, and it would be theit 3rd in a row away from the Emirates.

The Saints boss Ralph Hasenhuttle believes that although they kept a clean sheet on Saturday, they can be even better defensively tonight to continue their record. He told the Saints website after their FA cup win: “The good thing was the defensive work,”

“I think it was absolutely ok. We didn’t give them a lot of chances.

“What we can definitely do better is our game with the ball. It was not so calm, it was not so organised, not so brave like we want to do normally, and I think there we can play much better.

“The chances we created were ok. I think there can be a few more, and then a little bit more clinical in the final pass and the final decision, but it’s a strong side. We know that we need to have every part of our game being good on Tuesday night.”

“We spoke last season that it is not possible to concede so many goals and this season is the first season where we are defensively in a different mindset and a different mentality on the pitch,”

“We defend better as a team together and this is always the basis of everything.”

Arteta has also concentrated on improving Arsenal’s defence on last years figures, so this is certain to be very interesting this evening.

Another interesting fact is that although the Saints and Arsenal are in 10th and 11th in the League, a win for the Gunners could see them rise tom 8th in the table, whereas a Southampton win could put them as high as 6th if they win well.

So there is a lot at stake, and neither team will be keen to concede. So could they both have another clean sheet and the game end 0-0?