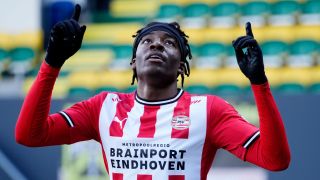 Arsenal and Tottenham now know how much exciting youngster will cost

PSV has set their asking price for Arsenal and Tottenham target, Noni Madueke.

The English youngster came through the ranks at Tottenham before leaving them for the Netherlands in 2018 as he found the path to first-team football blocked at the club.

He has now developed into one of the best youngsters in the Netherlands and has been linked with a return to England.

Arsenal first became interested in a move for him last year with The Sun reporting at the time that the Gunners want him to become one of their stars of the future.

The Gunners have continued to watch him, but Tottenham has also realised their mistake in letting him go and they want him back.

Todofichajes says the Lilywhites have made signing him an important goal and they have already contacted PSV to enquire about his transfer value.

The report claims that the Lilywhites have been told they would need to offer €50M.

In a boost to Arsenal’s chances of signing him as well, it adds that the Dutchmen are open to negotiating the fee before claiming that the ball is in Tottenham’s court and they need to push hard to sign him if they are serious about taking him to London.