Arsenal are the top form team in the League right now

How much have things changed since Arsenal’s absolutely awful January, when we were knocked out of both cups, didn’t win one game, and only scored one goal in five full matches, and that was in the 2-1 defeat to Man City.

That was a brilliant team performance and it seemed we were in good form, but just a week later we went out of the FA Cup to Nottm Forest. We followed that with an excellent draw at Anfield with ten men in the League Cup but in the second leg at the Emirates we were never in with a shout. The month ended with another limpid performance at home in the 0-0 draw to Burnley.

But then we had the midwinter break, and what a boon it proved to be. We got nearly all our players back from AFCON and injury and then we were back in business and surprised everyone with a 1-0 win away at inform Wolves.

Then came home wins against Brentford, and a last minute comeback against Wolves again, which was definitely worth celebrating and effectively ended their chances in the race for the Top Four.

We all know what happened in our nervy win at Watford but we came away with a 3-2 victory to propel into 4th place with 3 games in hand. Luckily in January we only had two League games (Man City and Watford) and they are the only two games that we have dropped points in our last ten League outings.

So, right now, the form table for the last ten League games looks like this…. 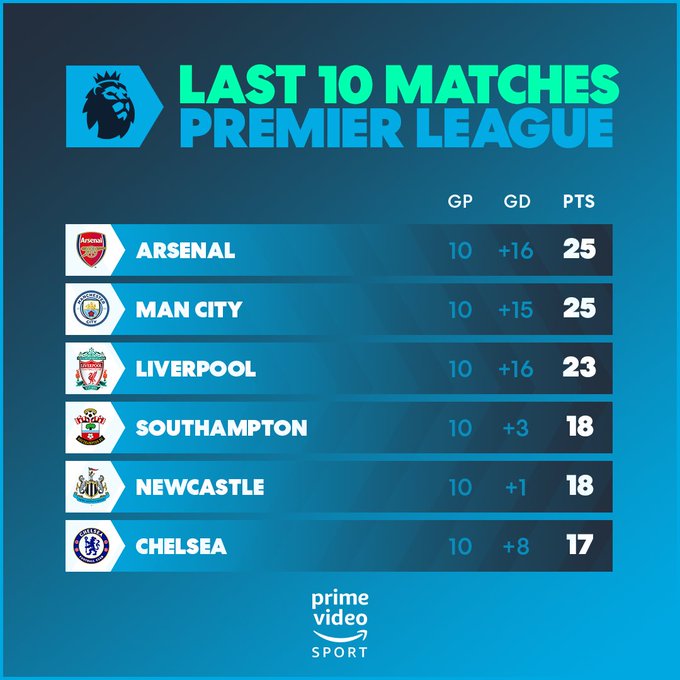 It’s nice to see us above Liverpool in something for a change, and to even have a better GD than Man City is quite an acievement. Also the form of Chelsea makes me think there is no reason why we can’t overtake them in the next ten games…

CALLING ALL ARSENAL FANS! Anyone who would like to contribute an Article or Video opinion piece on JustArsenal, please contact us through this link…

Mikel Arteta’s not as happy as usual after Watford win –