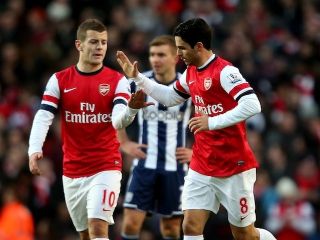 The midfielder left the Gunners in 2018 on a free transfer to join up with the Hammers, but that move didn’t really work out.

Wilshere has now agreed to mutually terminate his contract in East London, and will now seek a new club for the new campaign.

There is links claiming that he could join up with a lower-league side to train with in order to keep his fitness levels up whilst he searches for a new club, but that may not be needed.

TalkSPORT‘s Adrian Durham believes a return to Arsenal makes much more sense however, especially after hearing his return being rumoured.

“I’ve heard a rumour that Jack Wilshere was going to go back to Arsenal”, Durham told his listeners live on air.

“I know people might scoff at it, but actually I think there’s a lot of sense there.

“He won’t be playing every week, but with a Europa League campaign, I think he’ll be well managed by Arteta.

“There’s unfinished business for Jack at Arsenal. He was meant to do something really special at Arsenal Football Club.

“If he goes back there he’s got an understanding manager who will put his arm around him and allow him that time to stay fit and to play and express himself.

“I think it could be the perfect thing for him.”

Wilshere would likely be welcomed back to Arsenal by the fans, but I imagine the club would be eager to weigh any such contract on an appearance basis.

Could Arsenal offer Wilshere a route back to Arsenal? Would Arteta’s approach be ideal for bringing Wilshere back into first-team football?