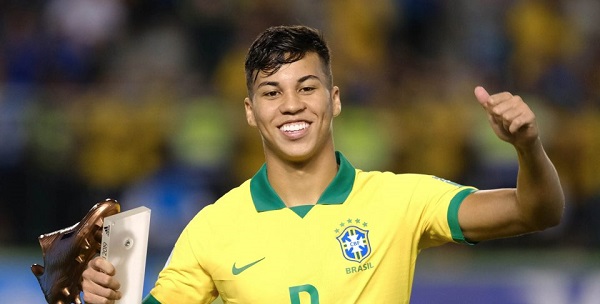 Arsenal has been linked with a move for young Brazilian striker, Kaio Jorge as he continues to reject a new deal from Santos for the extension of his stay with them.

The 19-year-old is one of the upcoming talents from the South American country and he looks set to become the next star to move to Europe from there.

Calciomercato says Santos is keen to tie him down to a new deal until 2024, but they cannot agree with his entourage.

As the days go by, it seems inevitable that he will leave and his current deal expires at the end of this year.

The report says the current state of things is such that if an agreement between him and the club is reached before the end of the year it would be a surprise.

Serie A giants Inter Milan and Juventus want him, but Arsenal is also in a powerful position to sign him with the report claiming that the Gunners have already contacted his agent.

Arsenal has been one team that trusts young players with game time and Gabriel Martinelli is the latest Brazilian to play for them.

Despite signing him as an unknown player, the Gunners have given him opportunities to shine.

That should give them some advantage when speaking to Jorge.