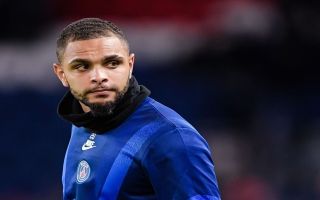 Arsenal is reportedly behind Barcelona in the race to sign PSG’s Layvin Kurzawa because the player would prefer a move to the Camp Nou.

Kurzawa has become an Arsenal target since Mikel Arteta became the club’s manager and the Spaniard almost signed the defender in the January transfer window.

However, both teams couldn’t strike a deal and Kurzawa decided to remain at PSG to see out his current contract.

There is no plan to offer him a new deal at the end of this season and he is prepared to join another team as a free agent, according to Spanish media outlet, Sport.

Arsenal, the report claims, has offered him a contract already to join them at the end of this season, but the player appears to be waiting for a contract offer from Barcelona.

He seems to be a wanted man around Europe with the report also claiming that Napoli, Juventus and Chelsea have made an approach for him ahead of the summer transfer window finally opening up.

Mikel Arteta isn’t expecting the club to give him a huge budget in the summer after they recorded financial losses last year, so he is looking for bargain deals like a free move for Kurzawa.