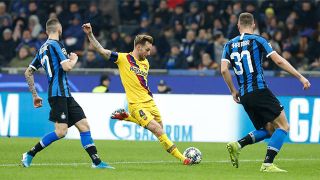 Mikel Arteta has been on the phone with Barcelona midfielder Ivan Rakitic over his potential move to Arsenal this summer.

His current club have already moved to sign two central midfielders ahead of the new season in Miralem Pjanic and Matheus Fernandes, potentially opening the door for the Croatian to make a switch.

Rakitic has only one year remaining on his contract, and the DailyStar claims that he is set to leave the club.

Le10 Sport adds that our manager Arteta has moved to talk to the Barcelona midfielder on the phone over a potential deal, with the manager supposedly telling him that he wishes for Rakitic to be the focal point of our midfield.

After winning the FA Cup on Saturday, our club assured that we would be playing in Europe going into the new season, and without that we may well have struggled to attract players of his calibre.

Rakitic has been with Barcelona for the last six seasons having made the switch from Seville in the summer of 2014, and has been a key figure in their midfield throughout.

The star also played a key role in helping his country to reach the final of the World Cup in 2018, and would bring a wealth of experience to our young and exciting squad.

It remains to be seen whether we will be able to strike a deal to bring Rakitic to the Emirates Stadium this summer, but there is little doubt that he could rapidly improve our side, albeit not in the long-term.

Would Ivan be suited to the Premier League?