Arsenal boss ‘thrilled’ but warns team they must ‘get better’

Mikel Arteta has told his Arsenal team that they will have to do better than their performance against West Ham, despite picking up all three points.

The Gunners were far from impressive as they beat West Ham in the Premier League in last night’s late game, but a few top performances were enough to get them over the line.

The manager has now admitted that he was ecstatic to win the tie, having known the result would not be easy to come by, but urged his side to ‘get better’ having been wasteful.

“I’m thrilled with the three points again. I knew the type of opponent we had in front of us and the way they play, how difficult it was going to be,” he told the BBC after the match.

“We made it even more difficult for ourselves with the amount of balls we gave away and spaces we left for the opponent.

“But I’m glad we found the right moment and reactions; we kept competing and believing in the final 20 minutes to win the game. There are still a lot of things we need to get better at.”

Arteta moved onto praise the performance of match-winner Eddie Nketiah, who he claims will bring the best out of his other players.

“He can do that every week, he’s a player who will push everyone else because he’s hungry and he’s got a great talent to score goals.

“We need people from the bench to come in and contribute and he was really helpful to win the points.”

The performance was far from ideal, but the sign of true champions is one that can continue to push on and grind out those results, and that could well be the only positive to take out of the viewing.

Do we have to take positives having won all three points? 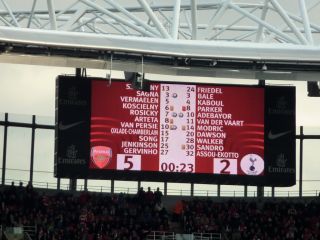