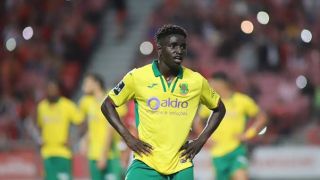 Arsenal has been linked with a move for Matchoi Djalo whom they consider a top talent for the future.

The Gunners have a reputation for giving first-team chances to youngsters who have proven worthy over time.

The likes of Bukayo Saka and Emile Smith Rowe have earned spots on the team by showing that they have what it takes at senior level.

Mikel Arteta remains committed to talent development and that is probably why Arsenal want Djalo.

The youngster plays for Pacos de Ferreira and made his debut for them in 2019 as a 16-year-old, breaking the age appearance record for the Portuguese top flight.

He is still just 18 and hasn’t made as much progress as anticipated following his debut for his current club, but he remains one of the finest youngsters in Portugal and has been doing very well for the country’s youth teams so far.

The Sun says Arsenal has been watching him and they consider him talented enough to make good progress in their youth ranks.

He is currently valued at just £1million, a fee that shouldn’t be too much for Arsenal to pay.

However, as he hasn’t made much progress since making his first-team debut, Arsenal might still feel he is overpriced.