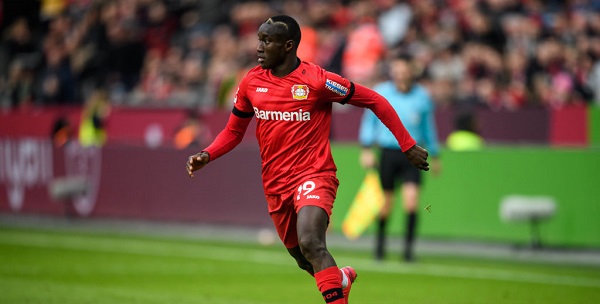 Arsenal has reportedly contacted the agent of Moussa Diaby as they look to sign the Bayer Leverkusen star this summer, according to Le10Sport.

The Frenchman only joined the Germans from PSG in the summer, but he has been so outstanding that teams have started circling around him.

His fine season continued as the Bundesliga restarted when he provided two assists for his team in their first game since the restart.

The report claims that two teams are fighting for his signature at the moment and they name Arsenal as one of the teams, the other team being Borussia Dortmund.

The report further claims that Arsenal has already contacted his agent over the move to the Emirates.

The Gunners reportedly have a beneficial relationship with his agent, which could make the move easier to pull off for Mikel Arteta’s side.

He joined the Germans for 15 million Euros in the summer of 2019 and the report claims that Leverkusen would only consider selling him if any team can double the money they paid to take him away from PSG.

Arteta is looking to bring in a number of reinforcements in the summer and he would appreciate a player like Diaby that can provide goals for his strikers.