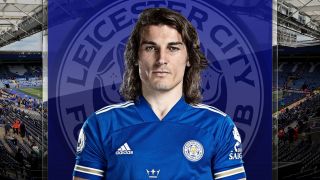 Arsenal could return for Leicester target and it is not Maddison

Arsenal is interested in a move for Leicester City defender, Caglar Söyüncü, as they continue their rebuild.

Transfermarketweb says the Gunners have been monitoring him for years before he moved to Leicester City.

The Foxes pipped them to his signature and he has been thriving in the Premier League.

Although he is at a competitive club, Arsenal hasn’t given up on signing him, and the report says they could make a January move for him.

The defender’s current deal expires at the end of next season and it remains unclear why he hasn’t been given a new one.

This could play to the advantage of Arsenal, who may pounce to sign him in a cut-price deal.

Leicester signed him for £18 million from Freiburg in 2018 and the report says Arsenal could even double that figure to convince the Foxes into selling him.

At 25, he could still offer the Gunners several years of active football and would be a strong competition for Ben White, which would help the Englishman to play at his best always.

Arsenal’s defence has looked solid recently, but a reliance on White and Gabriel Magalhaes means they could be one injury to either of them away from a defensive crisis.