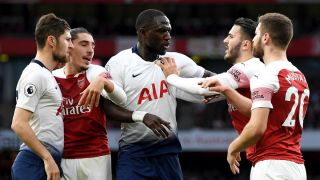 Arsenal couldn’t beat Tottenham with a team of bottlers

Nothing will ever change with this set of players. by Konstantin Mitov

I am so depressed lovely Arsenal people. Losing to a Tottenham team who failed a single shot on target against Bournemouth. This is how low it has become.

What sickens me is I knew we were losing from before the game. We had the better form, more rest and we were kind of favorites. And as soon as any pressure fell on our princess players, they bottled it.

They can’t win a game to save their life if a little pressure is on. Our back 3 has a mistake in every one of them. Why are we playing Kolasinac who can’t defend in a back 3? I have to look at Arteta here. David Luiz Is famous for mistakes, and so is Mustafi, who is objectively the best of the 3 which tells you quite something.

We gave Luiz a new deal… Why? I can’t wait to finish this season asap. Next season will be more of the same. We need to spend huge money on defending. We let the lead slip in 2 minutes and this reminds of a 2:2 draw at old Trafford, where Kolasinac again gifted United a goal just after we took the lead.

I am sick and tired of these players. I feel sorry for Martinez, Lacazette and Tierney who tried to put in an effort, but we have too many players not good enough. They are not fit to wear the shirt. If they cared at least a fifth of what a true Arsenal fan does about a NLD we would’ve roasted them.

This is a squad full of average cowards, and sadly I can’t see us moving them on. Change won’t happen in a day, but I feel like we are paying the price for going cheap again. A lesson we have failed to learn for 15 years.

I just feel so stupid that I wasted 2 hours and then 30 minutes more throwing things around the house in anger for a sorry bunch of losers, who’ve destroyed countless weekends with their pathetic lack of ability, commitment and desire.

This Arsenal has nothing in common with the one I fell in love with but the name. I can’t wait to see the back of so many of them. We need a new owner who would actually care. I’m so surprised how many PL clubs were bought and there’s interest in, but not the Arsenal. One of the biggest clubs in the land (historically). That should tell you something too.