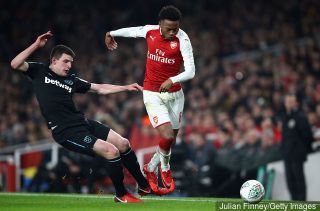 Arsenal ‘crying out for’ this England international’s talents

Paul Merson has claimed that Arsenal should battle with Chelsea to sign Declan Rice from West Ham this summer.

The 21 year-old has become a household name after a series of impressive displays for both club and country, and he has since been linked with moves to Manchester United and more recently, Chelsea.

The Blues are said to be eyeing a move for his signature this summer, but former Arsenal and England midfielder thinks that Arsenal would be crazy not to make their own move.

Merson said: “Chelsea have been linked with him, but I don’t know why Arsenal aren’t looking at Declan Rice.

“Arsenal are crying out for a holding midfield player. They don’t need a midfielder who’s going to be on the edge of the opposition box, they need a disciplined defensive midfielder, who is going to sit in front of the back four and organise the side; one who, when he gets the ball, gives it simple with 10-yard passes.”

Our side is expected to make additions this summer, with Mikel Arteta expected to be allowed to bring in some players to suit his new philosophy, and he could well have his transfer budget boosted by the thoroughly reported sale of Pierre-Emerick Aubameyang.

We put it to you at JustArsenal that we could already have two options already ready to step-up and chip in the goals which we would lose due to the Gabon international’s departure, which would allow us to concentrate on other areas of the team instead.

Our midfield wouldn’t be the worst place to start considering Saliba is already on his way this summer, but would Rice be a good place to spend a large chunk of our budget?

Should Aubameyang start for Arsenal against Slavia Prague on Thursday?
14 April 2021, 10:00