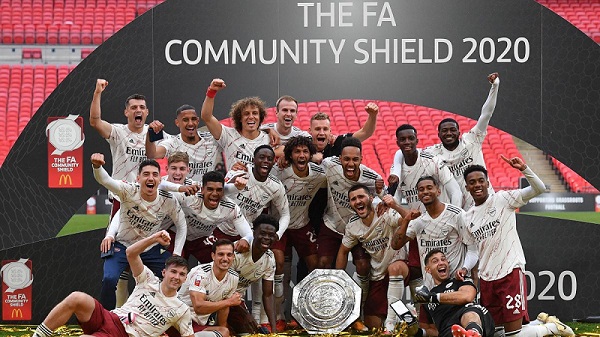 Arsenal dealt with Liverpool press to secure the Community Shield

Fa Cup holders Arsenal go into the start of next season with silverware after a win against Premier League champions Liverpool in the Community shield.

A trademark Aubameyang finish put Arsenal ahead after 12 minutes, curling into the bottom right corner of Allison’s net.
However, a scramble in the box led to an equalizer from Minamino late in the second half. A VAR check for handball was looked at, but the goal was given taking the game to penalties.

The gunners lifted their first piece of silverware available this season, after youngster Rhian Brewster hit the crossbar from his penalty. Arsenal defeated Liverpool on penalties, successfully scoring all 5 to Liverpool’s 4.

Arsenal’s opening goal is something we have seen regularly since Arteta was appointed as Arsenal boss. The Gunners comfortably played the ball in their own penalty area, avoiding Liverpool pressure, making them vulnerable to counter- attack.

The ball found its way to Saka from Bellerin’s pass, where the youngster continued to prove his excellence, switching the play to Aubameyang in Liverpool’s half. Aubameyang attacked Liverpool right-back Williams, opening his body up to curl an effort past diving Allison.

The Arsenal captain has scored five times at Wembley stadium within the matter of 42 days.

Liverpool’s sloppiness crept in again, as Arsenal Man of the Match, Maitland-Niles, as well as Saka and Nketiah created chances in and around Liverpool’s box.

Arsenal defended successfully against a dominating Liverpool attack, defending multiple crosses from Robertson to stop the chance of an equalizer.

Liverpool became more dominate towards the final whistle, beginning to have multiple chances. A goal to make it all square was only a matter of time away.

The Liverpool equalizer came from a nice piece of play from Salah, allowing Minamino to flick the ball back to the Egyptian, who then set the Japanese international through on goal to make it all square.

Although the Gunners had a small rough spell building up to the equalizer, Arsenal reacted well to the Liverpool goal. The introduction of Willock and Nelson allowed Arsenal to pose a more attacking threat closer to full time. Willock had a huge chance to win the game for Arsenal, but the young prospect headed wide.

Arsenal looked more confident going into the shoot-out. Liverpool prospect Brewster, smashed the cross bar with his spot kick, allowing Aubameyang to score the 5th and winning penalty for the Gunners.
Arsenal’s win in the community shield meant it was the 16th time they had won the competition, overtaking Liverpool’s 15 times. Liverpool are the first side to lose back to back Community Shield finals on penalties.

Arteta spoke to BT Sport quoting “You never get used to winning. I knew the challenge we faced today against this incredible opponent. Thank you very much to the players for the effort and performance.”

Arsenal boss also praised the gunners for how they dealt with Liverpool press, “The courage of the team, how aggressive we were without the ball and against the Liverpool press. I am pleased and knew in the second half we would suffer. But in the penalties, we had courage to do them right.

“In the last 10 minutes we took the ball and played in the final third. I am pleased how they competed. It creates belief.”

The first of many trophies this season I hope!