This season is becoming incredibly interesting the longer it goes on, and we still have five teams competing for the fourth Champions League spot, although (sadly!) Tottenham seem to be imploding despite getting a shock win over Man City last week.

Although Man United, Arsenal and West Ham would appear to be the favourites, most pundits have been fully expecting Bruno Lage’s men to be the outsiders in the race even though they are in excellent form.

I certainly don’t think that anyone can write Wolves off at all. Arsenal’s win at Molineux was Wolves only defeat in their last 8 League games, and they won 6 of those matches. That’s great form by anyones standards.

Even away from home, Wolves have an amazing record of only two defeats in their last 11, and they were against Man City and Crystal Palace. They have won their last four away matches on the road including at Man United and Tottenham, so have no fears about a trip to the Emirates.

So one can safely say that Wolves are a team in very good form and have no intention on giving up in the Top Four race.

But what about Arsenal’s home form? The only losses seen this season have been against Man City and Chelsea, which is pretty good. Here is our last 8 home games…. 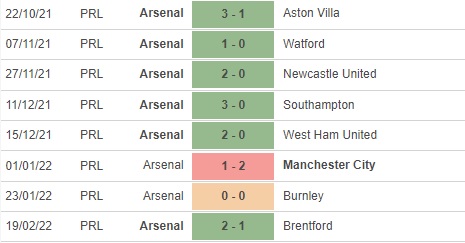 So to me, this looks like a bit of an immovable force meeting an unstoppable object…

I think this is most likely to be decided by the one single goal, and I hope that like two weeks ago, that will be in Arsenal’s favour…