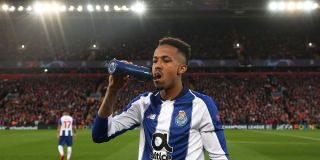 Arsenal has entered the race to sign Real Madrid’s Eder Militao as Mikel Arteta plots for some defensive recruitments in the summer.

Militao joined Madrid from FC Porto in the summer, but he has struggled to make an impact at the club with Zinedine Zidane preferring the Raphael Varane and Sergio Ramos partnership at the back.

When he has played, they have played him out of position as a right-back and that could force him to consider his stay with the Spanish giants.

Mikel Arteta is looking to revamp his Arsenal defence in the summer and the Spaniard may look to sell some of his current players to make room for new arrivals.

The Spaniard has had a look at Militao and according to Don Balon, he considers him a good fit for the system he wants to implement at the Emirates next season.

The same report is also claiming that the Gunners have established contact with Real Madrid regarding signing Militao.

Arsenal isn’t the only English side that is looking to sign the former São Paulo man with Tottenham also considering a move for him.

Despite not being an established starter at the Bernabeu, Madrid asked Spurs to pay £70 million if they want to sign him in the last transfer window so declares Don Balon.

It is unclear how much Arsenal will give Arteta to make new signings in the next transfer window, but he will need a decent amount if he wants to sign a Real Madrid player.