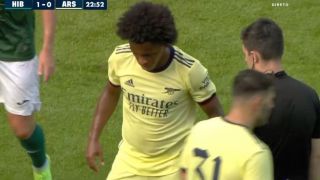 Arsenal expected to announce the termination of flop’s contract today

Arsenal could announce the departure of Willian by mutual consent today after ironing out the last details of his contract termination to enable him to return to Corinthians.

The Brazilian has been a flop since he moved to the club last summer and is now set to give up the remaining two years of his current deal.

He joined Arsenal from Chelsea for free and was made one of the club’s highest earners, but has hardly justified the wage.

Some Arsenal fans have turned against him in recent weeks and he is now set to finally leave.

ESPN Brasil reports that he has reached an agreement with the Gunners to end his deal so he can join Corinthians.

He has already agreed on personal terms with the Brazilian club and Arsenal is more than happy to allow him to leave for free.

The Gunners have now sorted out the last details that will enable him to clear his locker out at the Emirates.

This news will come as a relief to most Arsenal fans who have been keen to ensure that the attacker leaves their club.

His departure will also create space on the club’s wage bill to accommodate another signing and it will be interesting to see if they sign another player to replace him.