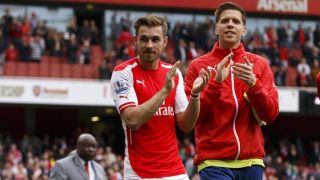 Arsenal expected to come in with an offer to re-sign former goalkeeper Wojciech Szczesny this summer.

The Polish international is currently plying his trade in Italy with Juventus, but with a number of wholesale changes currently happening at the club, he could well become available.

Fabio Paratici is confirmed as leaving the club next month, while Juve also confirmed today that manager Andrea Pirlo was also leaving, with Max Allegri expected to take his place.

While these moves are going on behind the scenes, a contract is believed to be on the table for AC Milan’s Gigio Donnarumma, who is out of contract.

The Italian’s arrival in Turin will likely seal the end of Szczesny’s hold on the number one spot, and an exit would appear set, with La Gazzetta(via TuttoJuve) claiming that Arsenal are expected to ‘come forward’ with an offer in the coming days.

The Gunners are also braced for their own potential departure of their number one Bernd Leno, who admitted he was open to a new challenge last month.

Would Szczesny be welcome back at the Emirates? Should the polish goalkeeper have been given more time to cement himself as our number one previously?