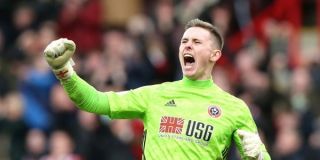 Arsenal will take on Sheffield United in the FA Cup on Sunday, and the Gunners will look to continue from where they left off against Southampton.

Mikel Arteta’s side beat the stubborn Saints 2-0 at Saint Mary’s, whereas United didn’t have a happy match day in their last fixture.

The Blades were beaten 3-0 against Manchester United, that was the second consecutive game that they have been beaten with the same scoreline since the restart.

However, two of their key players were missing in the game against the Red Devils and both are set to be welcomed back for this game.

Dean Henderson has been one of the best goalkeepers in the Premier League this season and the Englishman missed United’s last game because he couldn’t play against his parent club.

Influential defender, John Egan also missed the game because he was suspended.

Both players are expected to return for this game (FourFourTwo) and they would present a very tough test for Mikel Arteta’s side.

Arsenal is the most successful team in the history of the FA Cup. Even in the latter years of Arsene Wenger’s reign, when we struggled to compete for the Premier League, we still won the FA Cup.

Arteta will hope that his players can play as good as they did at Southampton to book a place in semi-finals.