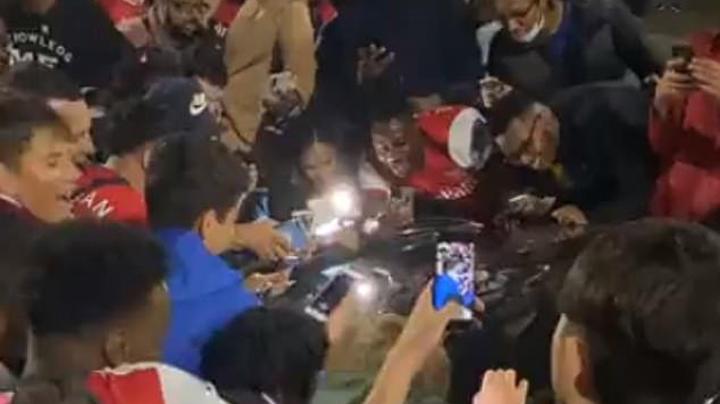 The attacker was one of the club’s goal-scorers in the game and The Daily Mail reports that delighted fans mobbed him as he left the Emirates in his £240,000 Lamborghini Huracan.

The report claims that most took videos of him as they celebrated the win and some climbed the car’s bonnet to greet their captain.

Part of the group of fans who greeted him in the flashy car was his friend and AFTV pundit Troopz.

The attacker has drawn criticism from fellow players because of his relationship with the Youtuber before now, but he could do no wrong yesterday.

His goal alongside strikes from Emile Smith Rowe and Bukayo Saka were enough to help Arsenal cruise into a 3-0 first-half lead.

Their opponents were able to gain some control of the game in the second half, but the damage had already been done and they could only score a consolation goal as Arsenal held on tight to their win to secure their ninth league point of the season.

Auba struggled for goals last season and he will hope he can score more for the club in this campaign as they seek a return to European football.

“Not enough for an home game” Aubameyang sends a message to Arsenal fans after Crystal Palace draw
20 October 2021, 8:30