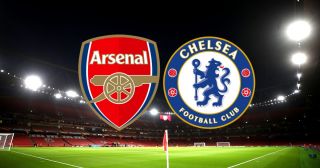 Arsenal fans need to believe we can beat Chelsea

Would we be fickle to hope for a result against Chelsea?

After Fridays dismal performance wouldn’t it be nice to come out against Chelsea and get a result?

Well of course any good result in any competitive game is a nice feeling but for Arsenal when it’s against one of the top rivals it is even sweeter. Especially Spurs 😉

Our squad, although it is young and full of some new faces who haven’t yet settled into the team, there is no denying that we do have individually talented players even if right now it is not connecting. Hopefully sooner rather than later it will begin to click and us fans will get to smile again.

Let’s hope it comes as soon as game week two in the league. But to do that we have to overcome a Chelsea team who won comfortably by a 3-0 scoreline in their opening match against Crystal Palace.

And as we all know they have also just added Romelu Lukaku to their ranks who if reports are to be believed will be making his debut against us.

And given that our next few fixtures are as they are below:

Carabao Cup third round if we go through

It is unlikely that we will be getting 15 maximum points. As nice as it would be, given how we have played against Brentford and given how the attitude of the team seems right now, the potential points could come from Norwich and Burnley but even they are not to be taken lightly and Norwich, like Brentford, are newly promoted.

Given also that we lost in pre season to both Chelsea and Tottenham, although the games were tight it is clear that all of the players will need to be on the ball if they are to get anything out of the games.

As we know in football and as we saw last season anything can happen on any match day. But the feelings I have for this season are that the top teams so far and I know it has been one game, but so far they seem more stable, more together and more ready for the competition.

I hope Arsenal find their feet and find it quickly to begin their journey of getting back to the very top or as close as possible because I would hate for my beloved team to be crumbling before my very eyes!

So as hard as it may be right now we have to have hope, belief and positivity that our players NOT ARTETA but our players, find their passion for the game and competitive levels and turn things around to begin to play the way we know they can and the way they should when representing the all important Arsenal shirt and crest!