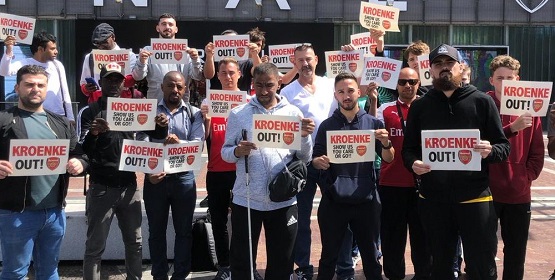 Despite getting some of their questions answered and clarifications on some issues in a forum yesterday, some Arsenal fans are planning a massive protest against their owner Stan Kroenke at the Emirates before their game against Everton this evening.

These Arsenal fans have been fed up with the American’s ownership of their club for years now and want him out.

He played into their hands when he agreed for his 9th-placed team to become a founding member of the proposed European Super League.

Fans rejected the proposal all over the world and Arsenal fans are still angry that Kroenke would join the effort just to enrich himself.

His son, Josh Kroenke, answered some of their questions yesterday and reiterated that they will not sell the club rather, they would invest to make them better.

However, with their team facing a fifth consecutive season without Champions League football, the fans still want the American out.

Sun Sports says they plan to hold a physical protest outside the Emirates before Everton’s visit for their crunch Premier League game this evening.

It even adds that there are rumours of former midfielder, Jack Wilshere joining the protest.

Arsenal needs to win that game and the players will not need this kind of distraction ahead of the match.