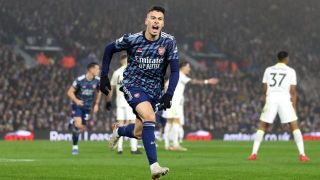 Arsenal fans should not be anxious if Aubameyang leaves the Emirates

Arsenal fans need not be worried about Aubameyang leaving

The Arsenal legend Michael Thomas told Caughtoffside: “Martinelli is a joy to watch. His work ethic is amazing and his willingness to always do what is required is an amazing trait to have at such a young age. He is adapting to the wider roles really well under Arteta, but I do see him as a number 9 in the future.”

After seeing so little action since the start of the season in August, Gabriel Martinelli has established himself as an important player for the current Arsenal team.

The young Brazilian has bagged goals when the team needed his help. Club captain Pierre-Emerick Aubameyang’s absence has hardly been felt.

For that, Martinelli deserves a lot of praise.

The first five appearances of the 20-year-old were spread across three months, starting from August 13th and ending on November 7th.

That wasn’t a pretty picture for the young striker. Many fans questioned whether Mikel Arteta even fancies the energetic player.

But since scoring *that* wonderful goal against Newcastle United last month, the former Ituano man hasn’t looked back.

Just thought you should know.

Since then, he has at least made one goal contribution on average in every match. To be more clear, he has four goals and two assists in the last six matches.

Despite playing just 788 minutes of football this campaign, the striker has seven goal contributions.

After being reduced to a bench warmer, any player could have lost the motivation to fight for their place in the first team.

Sky Sports have Gabriel Martinelli as their top-ranked player on current form. The Premier League have made Martinelli their header. We’re taking over. pic.twitter.com/tiGryw37hk

But Martinelli has proven that he has the mental ability on-top of the technical ability everybody knows of. The last test was maybe the Brazilian’s toughest.

Now, he looks like a player who is ready to run into concrete walls. He has come out fighting. He now certainly is a man, from a boy he was, when he joined from the Brazilian fourth division.

Arsenal fans never casted a doubt on Martinelli. And now the youngster is showing why the fans were right to do so.

Nobody knows how high the young Brazilian’s ceiling is.

Maybe it’s beyond what everybody initially thought it to be…

Aubameyang comes back to Arsenal under a cloud as his season keeps getting worse
18 January 2022, 10:08