Arsenal fans – SUPPORT THE TEAM NOT THE REGIME!

One of the JustArsenal readers put the above statement into a comment today and I was reminded that we had been in this situation for many years, so here is a post from last September where we were asked to put our differences aside and get behind the team. There is little that we can do about San Kroenke, who could buy every single Arsenal supporter if he wanted, but we simply cannot affect the way he runs the club which includes keeping Arsene Wenger in his current role, but we can still be very real Arsenal fans….

Do we support the team and not the regime? by anonymous

My cards on the table, I’m in the Wenger out brigade and have been for years. Like others who share this point of view, although I respect Wenger’s achievements, I have become disillusioned by the inevitable repeated pattern that Arsenal’s season consistently took and couldn’t see that there would be any change whilst Wenger was in charge.

Whilst some fans point to the lack of titles as the evidence of failure, my personal frustrations has been from repeated mistakes like the lack of investment in transfers and tactical issues on the pitch, because I strongly believe that no team has the divine right to any trophy just by turning up. I acknowledge that the premier league is one of the most difficult leagues in Europe and is not a level playing field due to some of the resources at some teams’ disposal.

Things last season became a bit of a circus, with the uncertainty of Wenger’s contract at hand, the future of Sanchez and Ozil in doubt and the dismal performances on the pitch, which led to planes in the skies, protests on ground and fights in the stands. Meanwhile, all this negative activity wrote its own headlines in the press, further making our club a laughing stock.

Whilst we did finish the season on a high with the trophy of the FA Cup, ultimately we fell one point short of Champion’s League football.

With the announcement of Wenger being awarded a new two year contract, I am concerned that there is every chance that this self destructive pantomime will continue. The one thing that we should all know about Wenger by now is he is a stubborn man and if he has signed a two year contract then he will be determined to see that through.

So here’s the question, what do fans do for the best? Will it be more planes, banners and fights in the stands? OR should we adopt the mantra “support the team and not the regime” and get behind our club? I for one think that if we have all been patient for so long and have waited for the dawn of a new managerial era then we can be patient for surely what has to be the last term of Arsene Wenger’s tenure. Two years, in the great scheme of things, is not a huge amount of time.

However, the potential for fans to throw their dummies out of the pram at the first sign of a sticky period is exceptionally high with our club. To those who will be easily triggered into acts of anarchy they need to think about the harm their actions will do to our club. Wenger will not leave (and nor will Kroenke) but actions off the field could affect the results on the pitch. We have to realise that we have some personal responsibility when our actions make our club less attractive to our transfer targets whilst our club is in a state of flux.

So to reiterate my main point, if we as fans can’t support the regime we need to get behind the team. 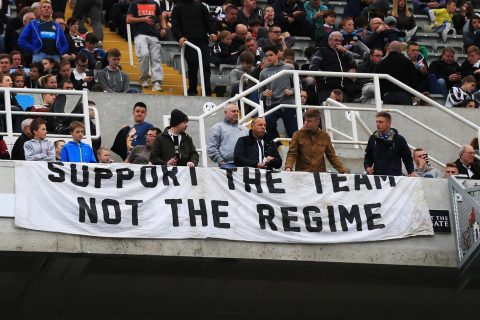